"You Princes Of Venture!" 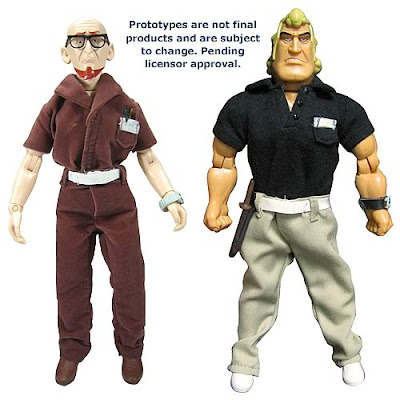 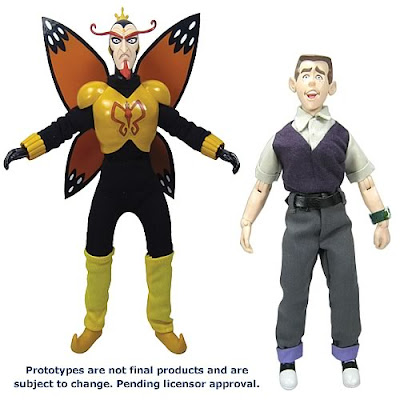 Coming soon (ETA August 2010) from Bif Bang Pow, it's the first run of The Venture Brothers action figures! Sculpted in the classic 8-inch Mego style with real cloth clothing, it's Dr. Venture, Brock Samson, the Monarch, and Dean (can Hank and Dr. Girlfriend be far to follow?). At almost $20 a fig, they're rather high end, but well worth it, I think. As you can see, these are only prototypes, but just look at that sculpt of Dean's head. Flawless! Available for pre-order over at Entertainment Earth. Mego-style is not my favorite toy format (well, sentimental, perhaps), but I'll take it!
Posted by Brer at 8:44 AM 2 comments:

"Most men--it is my experience--are neither virtuous nor scoundrels, good-hearted or bad-hearted. They are a little of one thing and a little of the other and nothing for any length of time: ignoble mediocrities. But a few men always remain true to a single extreme character: these are the men who leave a strong mark in history, and I should divide them into four classes. First there are the scoundrels with stony hearts...Next come the virtuous men with equally stony hearts...The third class are the virtuous men with golden hearts...And last and most rarely found are the scoundrels with golden hearts...It is the scoundrels with the golden hearts...who make the most valuable friends in time of need. You expect nothing from them. They are entirely without principle, as they themselves acknowledge, and only consider their own advantage. But go to them when in desperate trouble and say, "For God's sake do so-and-so for me," and they will almost certainly do it--not as a friendly favor but, they will say, because it fits in with their own crooked plans: and you are forbidden to thank them. These...are gamblers and spendthrifts; but that is at least better than being misers. They also associate constantly with drunkards, assassins, crooked businessmen and procurers; yet you seldom see them greatly the worse for liquor themselves, and if they arrange for an assassination you may be sure that the victim will not be greatly mourned, and they defraud the rich defrauders rather than the innocent and needy, and they consort with no woman against her will." 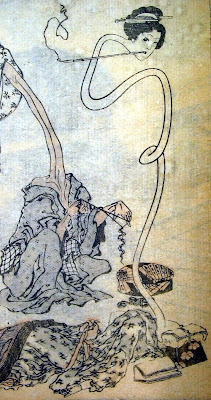 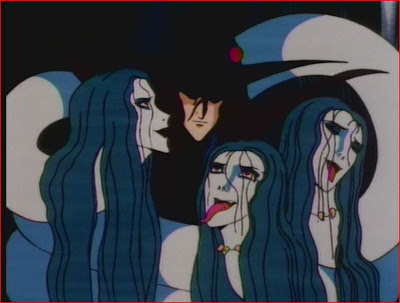 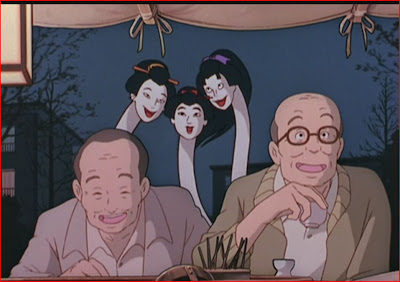 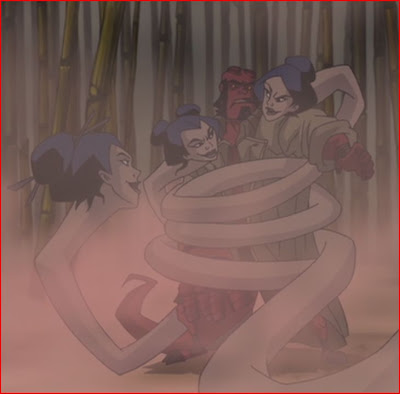 I first ran across a version of the rokurokubi when I watched the classic anime movie Vampire Hunter D on the USA Network years ago, although (as the old picture [fig.1] by the famous artist Hokusai shows) the rokurokubi are a long-standing traditional figure in the Japanese realm of Yokai (a term meaning, apparently, both a supernatural being and the realm or family to which it belongs, rather like the English terms fairy and Faerie). In Vampire Hunter D they identify themselves as "The Snake Women of Midwich," but I take this to be rather poor '80's English adaptation: they look and act at some points exactly like traditional rokurokubi, draining the life and power from D while twining their long prehensile necks around him [fig.2].

There are several different kinds of rokurokubi. One is a type of fury, cursed by their own failings to torment other transgressors against karma. Another tries to live a normal life among humans, but cannot resist showing off and scaring fools, children, drunkards, or sleepers, as they know that no-one will believe them. A third has been so successful in living life as a human that she forgets she is a rokurokubi, and only elongates her neck unconsciously while sleeping, giving anyone who is watching (like her hapless husband) a scare. This third kind may relate dreams of observing things from odd angles, unaware that this is caused by her head snaking around the room.

I next saw a group of rokurokubi while watching the "Operation Specter" part of Pom Poko, where the tanuki (supernatural raccoon dogs) are staging a parade of traditional Japanese ghost and fairy tale characters in order to inspire belief and fear among the humans who are destroying their woodland home. In one of my favorite scenes, two elderly gentlemen are drinking in an outdoor bar, opining on the foolishness of childhood beliefs, while behind them wondrous and horrific apparitions tumble by. The idea that if they would just turn away from their little lighted pool of comfort and explanations they might see that the world is full of more than they acknowledge [fig.3]. It's when I saw the three ladies behind them that I began to see there must be something behind this image.

It was further confirmed when I watched Hellboy: Sword of Storms. In this animated feature Hellboy is whisked away to a visionary, legendary Japan and encounters traditional characters, including a spider-woman, a fox-spirit, and a trio of rokurokubi [fig.4]. This third time interested me so much I finally looked into the legends and found out what was behind it all. What is still unexplained for me is why there are always three in these animated movies; I haven't seen any tale or tradition that insists on the number. Perhaps it is only because the tripling of female figures is always more threatening: three witches, three furies, three fates, all ganging up and surrounding the adventurer.
Posted by Brer at 11:56 AM No comments:

Late For Hallowe'en: A Book Review 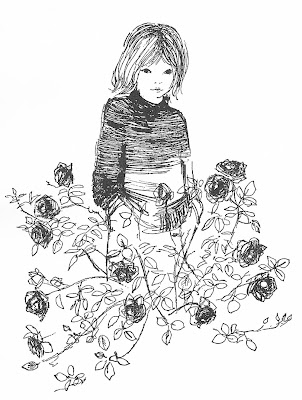 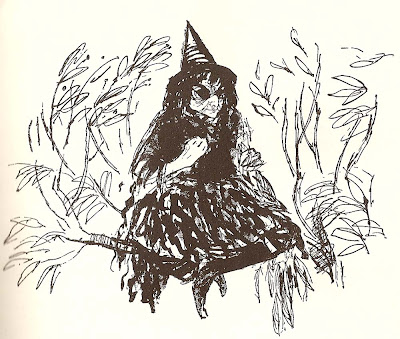 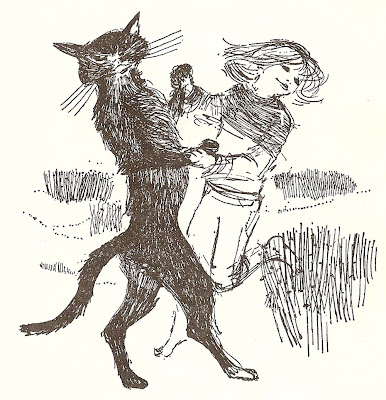 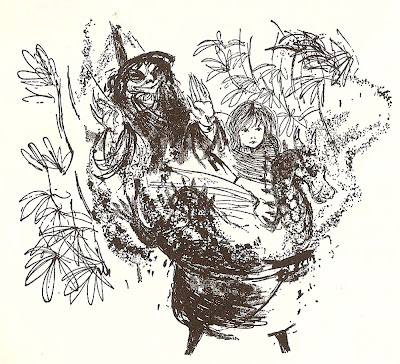 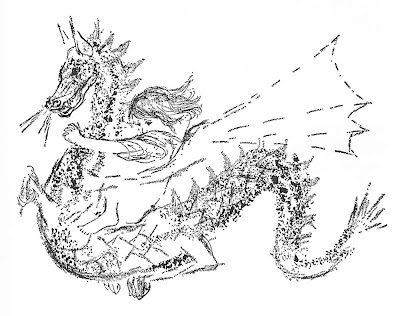 "A shiver ran down Judy's spine, but not entirely one of fright. It seemed as though she was on the threshold of a completely new, rather wicked, but very exciting world, a world that went on by itself quite independently of the human one. She was at once thrilled and apprehensive."
Every now and then I run across a book that I could have read as a kid, that I probably would have read as a kid, or that maybe I even did read but lost in the mists of time, so simply and easily it slips into the shelf by old favorites and odd influences. Such a book is Late For Hallowe'en, by Camilla Fegan.
It is the story of ten year old English girl named Judy, and what happens when a witch named Murgatroyd and her black cat Hornsbydale set up housekeeping in the rhododendron cave at the bottom of her garden. Murgatroyd has missed the Annual Witches' Dance on Hallowe'en (hence the title) where the flying spell on her broomstick can be renewed, and so she is stranded for a year.
Judy is a kind and curious girl with an eye for wonder. Murgatroyd is selfish, snappy, and has a thirst for power, but is not without a sort of off-handed generosity. The cat Hornsbydale is a mischievous tattletale, as likely to reveal the witch's secrets to Judy as to tell Murgatroyd what Judy is up to. And Judy does have her own secret agenda when Chinquintafizz shows up.
Chinquintafizz (Fizz for short) is a wise and benevolent dragon that Murgatroyd has released from a painting on an old lacquer tray, so she can learn the magic of Fizz's ancient master, the Chinese magician Fly-by-the-Moon. Fizz wants only to keep Judy out of the hands of the witches and return to Fly-by-the-Moon where he now dwells in the Perfect Beyond.
Judy, who learns more and more about the magic world as the year progresses, must come to terms with what this knowledge means to her, whether she will become a witch as Murgatroyd wants or follow a more enlightened path as Fizz counsels. It all comes to a boil on "The Night of a Hundred Witches," when Hallowe'en rolls around again.
A large part of the charm of this little book (it's only 109 pages long) are the set pieces of description. They are never so long as to slow the story, or so detailed as to paint complete pictures, but are intricate and vivid enough to give the imagination fine food to chew on. For instance, here is the rhododendron cave after Murgatroyd has set up residence:
"There was a bright fire burning in the centre of the cave, with the cauldron slung on a tripod over the centre, giving forth a soft, greeny-colored steam. There was a three-legged stool, and three shelves around the walls. The ends of the shelves balanced on the branches. One shelf was laden with bottles, one with jars, and one with a number of books, all so tattered and blackened with age that it was a wonder they didn't fall to pieces. Propping them up were bookends made of little stuffed barn owls. All the bottles and jars were labeled, and full of peculiar colored mixtures and powders."
Once a scene is set, it is seldom referred to again. The action proceeds briskly. There is never a time when Judy stops to consider the oddity of her adventures. She accepts dragons and witches in much the same way she accepts mice and lizards, owls and bats, simply as another datum of the world in which she lives. But in contrast to Murgatroyd, to whom magic is a matter of everyday business, Judy holds all things, mundane or magical, in wonder.
If I had to guess, I would place Late For Hallowe'en's literary ancestors as The Midnight Folk by John Masefield, Bed-knob and Broomstick by Mary Norton, and Carbonel, The King of Cats by Barbara Sleigh. The illustrations by Eileen Armitage are also reminiscent of Carbonel, being squiggly and suggestive rather than having pinned-down details.
This book was first published in 1966 in Great Britain; the American edition (the one I have) in 1967. Right now, available copies of it seem thin on the ground. A quick search revealed that it is on a "Deserves To Be Reprinted" list, that it evokes fond memories from those who recalled it, and the one edition for sale on Amazon was going for $165. I got mine for fifty cents at our local school book sale. This seems magical enough to me.
Posted by Brer at 1:34 PM 6 comments:

Thought For The Week: Feb. 8

"...Let us go on and take the adventure that shall fall to us."