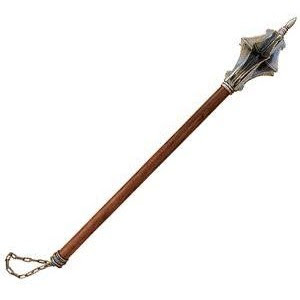 The mace was a club-like weapon popular through many centuries and in many countries. Shapes, sizes, and patterns varied a great deal, but mostly had a long handle with a flanged, knobbed, or spiked head. They were popular with churchmen or clerics of military bent, because they were crushing or bruising weapons, and thus circumvented the scriptural ban on the shedding of blood by the sword.

The flail, as a weapon, was based on the agricultural instrument for threshing corn, and thus favored by lower orders. This devastating weapon, consisting at its simplest as a weighted end suspended from a handle by a chain or leather strip, besides landing painful blows, could strike around shields or entangle the enemy's weapon. Sometimes called, in grim humor, a 'holy water sprinkler.' It could have several heads which made it more deadly but harder to handle. 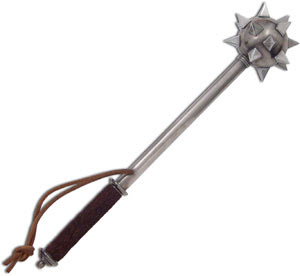 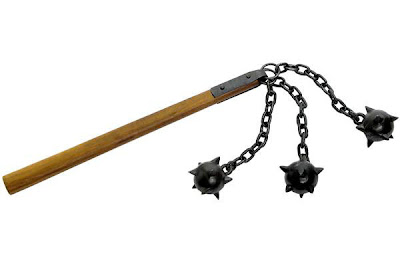 The morningstar (or 'morgenstern') was a spiked ball that could be used as the end of a mace or as the weight on the end of a flail. So-called because of its resemblance to a star.
Posted by Brer at 8:08 PM

Thanks for clearing up what a "holy water sprinkler" is. I've always wondered exactly which weapon was meant by that.

I'd love to find the 3rd mace in your pictures. That's a really nice one. ANY advice would be greatly appreciated! :)

There are only two maces in the post: Picture #1 and Picture #3. The others on chains are flails: Picture #3 and Picture #4 are of a mace and a flail with the spiked balls called morgensterns or morningstars.

Unfortunately, I don't know where you could get any of them; I just pulled them out of an image search as good examples.

Update! A "holy water sprinkler" can also refer to a type of mace, because of its resemblance to the "aspergillium" used in Catholic holy rites.

"Morningstar" was most commonly used to refer to very large, two-handed maces with protruding spikes. The German "morgenstern" (literally, morningstar) and English "holy water sprinkler" are both of this type. Some specimens are seven feet long or more.

Here's an interesting fact, many historians now believe that the flail as a weapon actually didn't exist. It wasn't very practical as a weapon, a "medieval nunchuck" I call it since it was dangerous to the user as it was the enemy and it was thought it was more of a ceremonial weapon than anything.