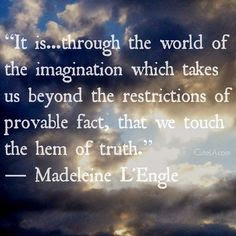 The grandest philosophic myths, those Socrates tells in the Platonic dialogues, are end-myths; they consummate the dialectical argument with the high of a cosmic vision. Now, in contemporary philosophy, grandeur being out of favor, mini-myths, flairless, little thought-constructs, are placed throughout the logical argument: Martians, counter-earthlings, brains-in-a-vat and possible worlds in­habited by that one-and-only unicorn whose affliction is non-existence. Finally, there are the real myths, the ones that are not made but re-told, and these are good as preludes to philosophy: In the Metaphysics (A) Aristotle says: “Wonder is the beginning of philosophy,” “myths are composed of wonders,” and so “the myth lover (philomythos) is somehow a philosopher (philosophos).”-- Eva Brann

[Lin Carter] turns to a discussion of Amadis of Gaul, and his admiration for it. As he explains, the popularity of Amadis sprung a wealth of new romances, mostly imitators. Most of those works which followed the Amadis became so convoluted with the idea of topping the last, that they became dreary and nearly unintelligible. --"Kilsern"