A Bit of Beastliness 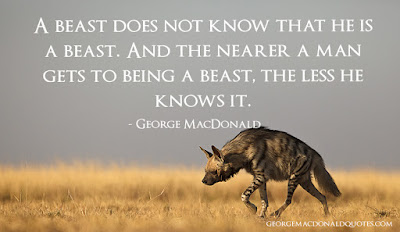 Wherever there is Animal Worship there is Human Sacrifice. That is, both symbolically and literally, a real truth of historical experience. Suppose a thousand black slaves were sacrificed to the black-beetle; suppose a million maidens were flung into the Nile to feed the crocodile; suppose the cat could eat men instead of mice--it could still be no more than that sacrifice of humanity that so often makes the horse more important than the groom, or the lap-dog more important even than the lap. The only right view of the animal is the comic view. Because the view is comic it is naturally affectionate. And because it is affectionate, it is never respectful....[T]he two extravagances which exist on the edges of our harassed and secretive society to-day are cruelty to animals and worship of animals. They both come from taking animals too seriously: the cruel man must hate the animal; the crank must worship the animal, and perhaps fear it. Neither knows how to love it. --G. K. Chesterton

"Why," said he, "because at the end of a great civilization the air gets empty, the light goes out of the sky, the gods depart, and men in their loneliness put out a groping hand, catching at the friendship of, and trying to understand, whatever lives and suffers as they do. You will find it never fail that where a passionate regard for the animals about us, or even a great tenderness for them, is to be found there is also to be found decay in the State."
"I hope not," said I. "Moreover, it cannot be true, for in the Thirteenth Century, which was certainly the healthiest time we ever had, animals were understood; and I will prove it to you in several carvings."
He shrugged his shoulders and shook his head, saying, "In the rough and in general it is true; and the reason is the reason I have given you, that when decay begins, whether of a man or of a State, there comes with it an appalling and a torturing loneliness in which our energies decline into a strong affection for whatever is constantly our companion and for whatever is certainly present upon earth. For we have lost the sky." --Hilaire Belloc