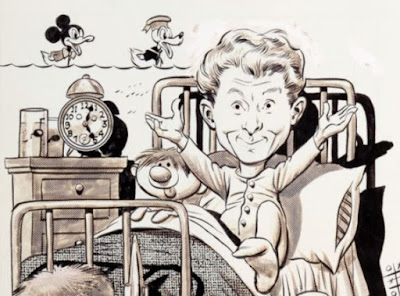 In 1958, Danny Kaye released a novelty album (music and lyrics by Milton Kaufman) called "Mommy, Gimme a Drinka Water." It featured Kaye playing a five-year-old bratty boy, and was manifestly of the old-school "aren't they precious naive idiots?" view of childhood. But when I first encountered the album's title song, I think I experienced it as almost nobody ever had, and as the producers possibly never conceived.

I don't remember when or where I saw it, and I came to it with no context. If you went onto YouTube and listened to it, you probably now know enough about it to never hear it as I heard it. I was flipping channels on the TV, and there it was. Danny Kaye, alone on a stage, eyes closed, rambling along to plaintive, haunting clarinet music, impersonating a little boy fighting sleep and calling for his mother. I didn't know who he was, or the context of the song, or anything. So I instinctively applied my own context.

However young I might have been, I already had an idea about hypnotism and regression. These were constant ploys on comedy shows at the time, even on cartoons like The Flintstones. I imagined that this performance was supposed to be a man re-living a childhood experience, possibly through therapy. As such, I took it absolutely seriously.

Because I wasn't seeing any comedy. Perhaps it was the melancholy music, perhaps it was the quality of Mr. Kaye's channeling of a childish mindset, but what I saw was baffled raging ego striking at the thing it wanted, anger at the injustice of life, fear of the encroaching dark, and exasperated yearning for a ministering maternity that doesn't come. The winding down of a mind, until it's left a little boy alone in the dark.

And what I thought was, that's what inside every adult, no matter how accomplished or capable or mature they seem. At their core there is always a part crying out for mother, mother to bring them a drink of water, mother to comfort them in the night, to soothe by her simple presence. On our worst nights, when we're sick, or alone, or in the dread fear of death, we want that.

What an erudite and thoughtful analysis of a song that has haunted me since I was the age of the little boy Danny Kaye was portraying. We all want to be heard, we all want to be comforted and free from fear, we all want attention. When your mother doesn't come or is gone forever, there is nothing worse. But we continue reach out for that glass of water, whether we need it or not.