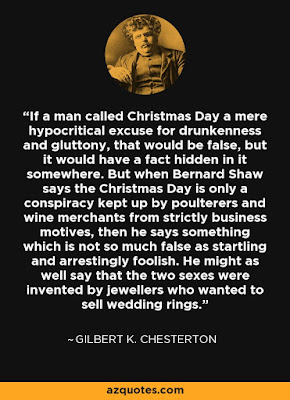 THERE IS no more dangerous or disgusting habit than that of celebrating Christmas before it comes, as I am doing in this article. It is the very essence of a festival that it breaks upon one brilliantly and abruptly, that at one moment the great day is not and the next moment the great day is. Up to a certain specific instant you are feeling ordinary and sad; for it is only Wednesday. At the next moment your heart leaps up and your soul and body dance together like lovers; for in one burst and blaze it has become Thursday. I am assuming (of course) that you are a worshipper of Thor, and that you celebrate his day once a week, possibly with human sacrifice...

But I say that whatever the day is that is to you festive or symbolic, it is essential that there should be a quite clear black line between it and the time going before. And all the old wholesome customs in connection with Christmas were to the effect that one should not touch or see or know or speak of something before the actual coming of Christmas Day. Thus, for instance, children were never given their presents until the actual coming of the appointed hour.

Of course, all this secrecy about Christmas is merely sentimental and ceremonial; if you do not like what is sentimental and ceremonial, do not celebrate Christmas at all. You will not be punished if you don't; also, since we are no longer ruled by those sturdy Puritans who won for us civil and religious liberty, you will not even be punished if you do. But I cannot understand why any one should bother about a ceremonial except ceremonially. If a thing only exists in order to be graceful, do it gracefully or do not do it. If a thing only exists as something professing to be solemn, do it solemnly or do not do it. There is no sense in doing it slouchingly; nor is there even any liberty. I can understand the man who takes off his hat to a lady because it is the customary symbol. I can understand him, I say; in fact, I know him quite intimately. I can also understand the man who refuses to take off his hat to a lady, like the old Quakers, because he thinks that a symbol is superstition. But what point would there be in so performing an arbitrary form of respect that it was not a form of respect? We respect the gentleman who takes off his hat to the lady; we respect the fanatic who will not take off his hat to the lady. But what should we think of the man who kept his hands in his pockets and asked the lady to take his hat off for him because he felt tired?

This is combining insolence and superstition; and the modern world is full of the strange combination. There is no mark of the immense weak-mindedness of modernity that is more striking than this general disposition to keep up old forms, but to keep them up informally and feebly. Why take something which was only meant to be respectful and preserve it disrespectfully? Why take something which you could easily abolish as a superstition and carefully perpetuate it as a bore?

Let us be consistent, therefore, about Christmas, and either keep customs or not keep them. If you do not like sentiment and symbolism, you do not like Christmas; go away and celebrate something else; I should suggest the birthday of Mr. [Joseph] M'Cabe. No doubt you could have a sort of scientific Christmas with a hygienic pudding and highly instructive presents stuffed into a Jaeger stocking; go and have it then. If you like those things, doubtless you are a good sort of fellow, and your intentions are excellent. I have no doubt that you are really interested in humanity; but I cannot think that humanity will ever be much interested in you.

A bracing quaff of Chesterton, as his pieces usually are.