Christopher Tolkien Passes Away at Age 95 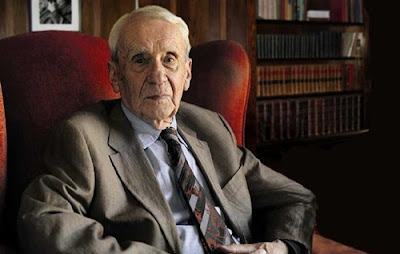 I really didn't want to write this post, for several reasons. Primarily, of course, because this is very sad news. Less of importance is the further weight it places on my seasonal gloom. I cannot add anything more to his importance: how he heard "The Hobbit" from J. R. R. Tolkien as a bedtime story with his siblings, the support and interest he showed his father during the writing of "The Lord of the Rings", his re-drawing of the Middle Earth maps to replace his father's original sketches, his constant work as conservator of his father's legendarium up until almost a year ago. Did he resign because he knew he was going to die, or did he pass away because he felt he could finally rest?

What can I say that would add to that? I can only recount my own opinions of him through the years. When I first heard about Christopher Tolkien, I couldn't help but feel jealous. Next to actually being Professor Tolkien, what could be better than being his son? Then I was annoyed with him in the person of the Tolkien Estate, and the slowness of the release of unpublished work. Only gradually did I become aware of the enormous task he had taken on his shoulders, and his protection of his father's legacy. The more I learned about his own unique qualifications, his enormous scholarship, his careful analysis of the ancient, sometimes overwritten pile of manuscripts that had become scattered through the years, the more I appreciated his efforts. In the end I respected him almost as much as his father, if only for protecting Middle Earth from even my own juvenile desires.

What happens to this legacy now that the door-warden is gone? I shudder to think what comes after. But Christopher Tolkien's work will still stand as an enduring monument, whatever grows up around it.