Giving Thanks Again For The Rankin/Bass Hobbit 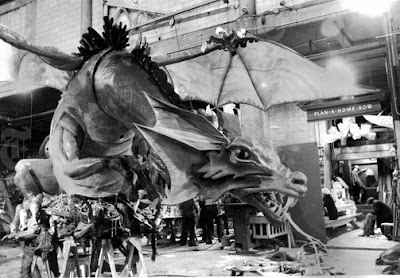 Today is the fortieth anniversary of the premiere. Seven years ago I had this to say about the Rankin/Bass version of The Hobbit:

The Rankin/Bass adaptation of J. R. R. Tolkien's The Hobbit first aired today thirty-three years ago, on November 27, 1977, four days after Thanksgiving. It's hard to believe that an entire generation has passed since then, that there are grown-ups today who can't remember a time when it wasn't around. I remember I had only heard about Middle-Earth four years earlier, but even that short time had got me yearning for any adaptation of the material. The excitement had been building since I first heard it announced and was eager for any scrap of news; there were articles in TV guide and in our Weekly Readers; there was even a float dedicated to it in a Thanksgiving Day parade. Finally on the evening the family was gathered in a darkened room, and to the strains of an enchanting melody we heard John Huston as the voice of Gandalf begin, "In a hole in the ground, there lived a hobbit..."

There were cuts to the story and some disappointing designs (like the elves), but on the whole it was a great adaptation. I liked the fact that except for the song "The Greatest Adventure" all the songs were taken from Tolkien's original poetry. In those pre-VCR days the closest we could get to a copy of the show was a long-playing set of records with a booklet; a deluxe edition of The Hobbit with illustrations from the show was soon added. Many a night we would lay down to the sound track set up to play, and drift off to the unfolding of Bilbo's wanderings. We listened to it so much that we could recite it all straight through, and even today a stray phrase can start my brother and me quoting at length.

Nowadays of course in the wake of Peter Jackson's The Lord of the Rings films a big budget adventure movie of The Hobbit is in the works, and you will hear people now and then deploring the quaintness and childishness of the Rankin/Bass show. But The Hobbit is a children's book, perhaps one of the greatest children's books ever, and I hope that in the fever of making a "sequel" to Jackson's films that is not completely forgotten. Rankin/Bass did a good job with that.

The picture above is from the Thanksgiving Day Parade float that year.

Since I wrote that post the Peter Jackson Hobbit movies have come out, in all their bloated wanderings. Those adaptations were, as Samuel Johnson might say, both good and original, but the parts that were good came from the original source, and the parts that were original with Jackson's team were, on the whole, not good. Rankin/Bass, for its flaws, did a very good adaptation of The Hobbit in seventy-eight minutes, in some ways better than the four hundred and ninety-eight minutes of the combined Jackson films.

So, forty years on, even at my niece's wedding, my brother and I rolled out great swaths of dialog from the special while we prepared for the reception. It's been woven into our DNA. If every copy of the Rankin/Bass Hobbit soundtrack were destroyed, we could completely reconstruct it, with music and sound effects, from scratch. To us, the Rankin/Bass special was more than a show, it was a shared experience, almost a language. I suppose I can't really give an unbiased opinion about it. But I think that, even stripped of personal nostalgia, it is a wonderful artistic achievement.