Something To Consider On Thanksgiving 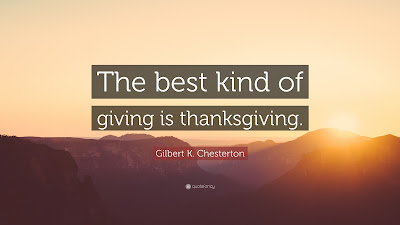 The institution of the family is to be commended for precisely the same reasons that the institution of the nation, or the institution of the city, are in this matter to be commended. It is a good thing for a man to live in a family for the same reason that it is a good thing for a man to be besieged in a city. It is a good thing for a man to live in a family in the same sense that it is a beautiful and delightful thing for a man to be snowed up in a street. They all force him to realize that life is not a thing from outside, but a thing from inside. Above all, they all insist upon the fact that life, if it be a truly stimulating and fascinating life, is a thing which, of its nature, exists in spite of ourselves. The modern writers who have suggested, in a more or less open manner, that the family is a bad institution, have generally confined themselves to suggesting, with much sharpness, bitterness, or pathos, that perhaps the family is not always very congenial. Of course the family is a good institution because it is uncongenial. It is wholesome precisely because it contains so many divergencies and varieties. It is, as the sentimentalists say, like a little kingdom, and, like most other little kingdoms, is generally in a state of something resembling anarchy. It is exactly because our brother George is not interested in our religious difficulties, but is interested in the Trocadero Restaurant, that the family has some of the bracing qualities of the commonwealth. It is precisely because our uncle Henry does not approve of the theatrical ambitions of our sister Sarah that the family is like humanity. The men and women who, for good reasons and bad, revolt against the family, are, for good reasons and bad, simply revolting against mankind. Aunt Elizabeth is unreasonable, like mankind. Papa is excitable, like mankind. Our youngest brother is mischievous, like mankind. Grandpapa is stupid, like the world; he is old, like the world.

Those who wish, rightly or wrongly, to step out of all this, do definitely wish to step into a narrower world. They are dismayed and terrified by the largeness and variety of the family. Sarah wishes to find a world wholly consisting of private theatricals; George wishes to think the Trocadero a cosmos. I do not say, for a moment, that the flight to this narrower life may not be the right thing for the individual, any more than I say the same thing about flight into a monastery. But I do say that anything is bad and artificial which tends to make these people succumb to the strange delusion that they are stepping into a world which is actually larger and more varied than their own. The best way that a man could test his readiness to encounter the common variety of mankind would be to climb down a chimney into any house at random, and get on as well as possible with the people inside. And that is essentially what each one of us did on the day that he was born.