Samuel Johnson: One Of My People 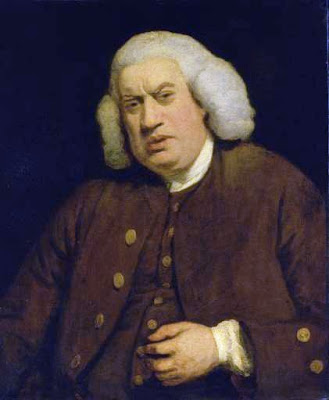 Samuel Johnson's reputation in the historical and literary world seems to follow the pattern of his personal life; first there is the awareness of a gruff, imperious surface that on greater acquaintance reveals deep, even tender, concerns. Born to a poor bookseller and his wife who were already past prime child-bearing age, he was sent to nurse with a local woman who unfortunately passed along a tubercular infection of the lymph glands known as scrofula along with her milk. This scarred him and left him with poor eyesight throughout his life, but he declared that what he lacked in acuity of sight he had to make up with precision of observation, and that this led him to his analytical turn of mind.

Despite this misfortune he grew up tall and strong, if ungainly, and like many children of older parents he developed a precocious intellect. After a few years in a "dame school", being taught to read and write, he became largely an autodidact, learning mostly from reading the stock in his father's failing bookstore. Under the influence and example of a rich, intellectual uncle, Cornelius Ford, he attended Oxford for nine months, but when the uncle passed away and money became tight he left without graduating. During the time of his education he was honored for being more learned than all his schoolfellows if a little lazy, and a habit of pride and independence that he had were only deepened by his obvious poverty among his collegiate fellows.

He returned home to further family tragedy. His only brother, Nathaniel, appears to have committed suicide, though this was hushed up for shame. Johnson puttered around at home, helping with the family business and trying to make a living with his pen, but the distance between his hometown of Lichfield and the cultural center of London made this difficult. At the age of 25 he astonished his family and history by marrying the widow Elizabeth Porter, who was 46. Monetary reasons have been adduced, but he himself declared that it was a "love match", and that "Tetty" as he called her saw past what he saw as his own failings and flaws to the worth underneath.

He used most of her money to establish a school at Edial with himself as the primary teacher; educational efforts have been the desperate fallback for learned people for a long time. The school was never very successful, and when it failed Johnson decided it was time to set off for London to try to earn a living by his pen in earnest. He set off walking (to save coachfare) accompanied by his favorite and last remaining pupil, David Garrick. Garrick went on to become the greatest actor of the age, and Johnson began the tough climb up the ladder of success as an author.

This was a particularly hard time for Johnson. When he first arrived and asked a prominent publisher for help and advice, he was told (as the man looked at his gigantic stature) to get a pad for his back and take a job as a porter, or moving man. Johnson took any writing job, mostly as a journalist, writing articles to supply grist for the weekly journals and digests. Many nights he didn't have the money for a room and walked the streets until morning. Tetty was established in a house in the suburbs and most of the money went to support her. Eventually Johnson landed the job of reporting on the speeches of Parliament; since rules at the time precluded anyone from outside being present, only the names of the speakers and the gist of their arguments were given him; he would then write up the speeches as they ought to have been, and many a Member was astonished to find the eloquence attributed to them that they scarce could dream of.

Essays for The Idler, poetry, biographies, all added to his growing fame. He still had sometimes to take purely practical jobs, and one was cataloging the contents of a vast private library that was going up for sale; when the broker who hired him found him reading one of the volumes to ascertain its value berated him for wasting time, Johnson in anger felled him with the weighty volume. His life on the street made him ever ready to defend himself physically as well as in debate; he often carried a cudgel as a walking stick through the streets in case he was set upon by hired ruffians from someone he might have angered.

His literary chops being established, he felt it was time to cement his position with some great work. And he settled on a project that had bedevilled the book world for some time: to produce the first complete general dictionary for the English language. It took him more than a decade to produce, with the aid of a dozen assistants and none of the patronage of the wealthy to encourage him. During the period of its' compilation Tetty died, his father and then his mother passed away (he wrote the short novel Rasselas to pay for her funeral); when Lord Chesterfield, to whom Johnson had applied for help and been ignored, tried to attach his name to the project, Johnson sent him a letter coldly rejecting any such connection as now unnecessary, since anyone he could have pleased by his success was gone, and "I am grown solitary." The age of patronage heard its' death knell, and "Dictionary" Johnson was born.

Coming soon (I hope), Part Two: Success and Boswell
Posted by Brer at 8:18 AM

You know, we have often debated who would be best to portray Johnson in a biopic. Robbie Coltrane played him in Black Adder and did a pretty good job. He most resembles Tom Poston in that painting but not only would that be miscasting Poston is as dead as Johnson now. Maybe a bulked up Geoffrey Rush or Tom Wilkinson. I know this is a trivial pursuit but I can't help it. The go-to guy for "un-handsome" roles is Paul Giamotti and if he wasn't so scrawny I believe he could do it. There's someone perfect out there...