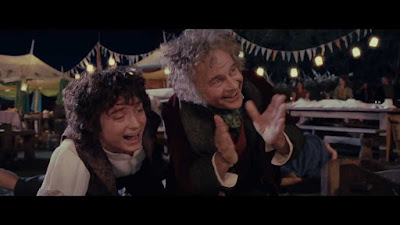 Tolkien made September 22, the day on which the first copies were purchased and read, Bilbo's and Frodo's birthdays, and the American Tolkien Association has designated as "Tolkien Week" the week in which September 22 falls. --The 1938 Hobbit Project

How the date of Bilbo's (and Frodo's) birthday corresponds with our calendar is a matter of debate. Appendix D of The Lord of the Rings says that our New Year's Day (January 1) corresponds "more or less" to the Shire's "January 9", and in standard years our September 14 and the Shire's "September 22" both fall 256 days after that date. However, Appendix D also says that the Shire calendar's "Midyear's Day" is "intended to correspond as nearly as possible to the summer solstice." In the Shire calendar, "September" (Halimath) 22 is 83 days after Midyear's Day. If we take the summer solstice to be our June 21, then Bilbo's and Frodo's birthday must be 83 days later, which is our September 12. --Footnote from Tolkien Gateway

Does the precession of the equinoxes have anything to do with it?

It would hardly seem like a coincidence, but there seems to be little to it beyond the publication date. There are, however, several dates of significance lined up with Christian holidays, from the Fellowship leaving on December 25 (Christmas) to the Destruction of the Ring on March 25 (as Tom Shippey in The Road To Middle Earth points out, an ancient Anglo-Saxon tradition, the date of both the Crucifixion and the Annunciation).

Tom Bombadil seems to only go into Old Man Eillow's forest around the equinoxes.

That is an interesting observation, but I don't know if we can say it is the 'only' time he goes. Tom Bombadil goes to that part of the forest to gather water-lilies for Goldberry. He is sure to be there in the spring at the first of the season and in the fall before winter comes. He tells the Hobbits they are 'lucky' because this was the last time he would have been there until spring. He might very well go there for lilies any time in between, when Goldberry wants them. They are the only specific time he mentions that he goes, but it could be that it's like saying you're at the game at the first crack of the bat until the last inning is run.