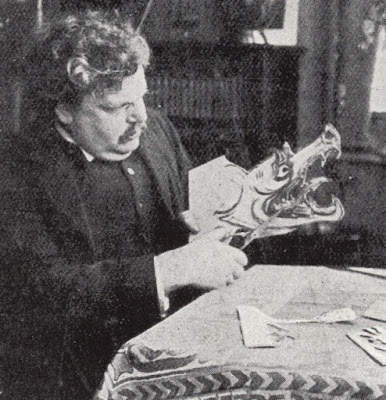 IF the modern man is indeed the heir of all the ages, he is often the kind of heir who tells the family solicitor to sell the whole damned estate, lock, stock, and barrel, and give him a little ready money to throw away at the races or the nightclubs. He is certainly not the kind of heir who ever visits his estate: and, if he really owns all the historic lands of ancient and modern history, he is a very absentee landlord.

He does not really go down the mines on the historic property, whether they are the Caves of the Cave-Men or the Catacombs of the Christians, but is content with a very hasty and often misleading report from a very superficial and sometimes dishonest mining expert. He allows any wild theories, like wild thickets of thorn and briar, to grow all over the garden and even the graveyard. He will always believe modern testimony in a text-book against contemporary testimony on a tombstone. He sells the family portraits with much more than the carelessness of Charles Surface, and seldom knows enough about the family even to save a favourite uncle from the wreck. For the adjective ‘fast’, which was a condemnation when applied to profligates, has become a compliment when applied to progressives.

I know there are any number of men in the modern world to whom all this does not in the least apply; but the point is that, even where it is obviously applicable, it is not thought particularly culpable. Nevertheless, there are some of us who do hold that the metaphor of inheritance from human history is a true metaphor, and that any man who is cut off from the past, and content with the future, is a man most unjustly disinherited; and all the more unjustly if he is happy in his lot, and is not permitted even to know what he has lost. And I, for one, believe that the mind of man is at its largest, and especially at its broadest, when it feels the brotherhood of humanity linking it up with remote and primitive and even barbaric things.

Labels: G. K. Chesterton, on man: heir to all the ages, quote