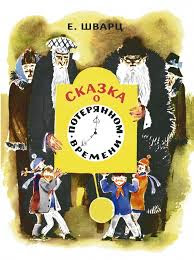 So, looking for the "Terrapin Turtle of Zanzibar," I ran across this story that I'd been looking for in a vague way for a few years. The first time I read it was in Fourth Grade (about 1973), and what impressed me at the time was an illustration that accompanied it.

It's the story of four children whose habit of wasting time puts them in the power of four wizards who mean to steal their time to become young again. The picture that fascinated was the evil magicians who have momentarily become young, their angry staring eyes and grim expressions contrasting horrifyingly with their youthful forms. Once more I had no memory of the title or author, so a few difficulties there.

While riffling through the Loganberry "Find A Book" site, I read the description of the story, and knew I'd found it. It was "The Tale of Lost Times" (sometimes translated as "The Tale of Stolen Time"), a Russian story, first published in 1940, and even adapted into a movie in 1964. The author's name is Evgeny Schwartz (or Yevgeny Schwarz, or Evgeniy Shvarts, depending on who you ask). Haven't found the picture that so affected me, but there it is.
Posted by Brer at 8:21 AM