Oda and the Woolly White Pig 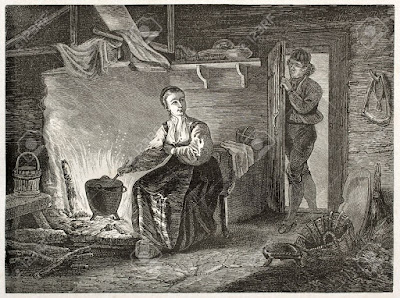 ODA AND THE WHITE WOOLLY PIG

This was in the old country, in the old time, you understand. The land had not been greatly turned to Christ yet. Oda, who was the grandmother's sister, was the family's wise-woman. She had converted, but carried on some of the old ways. The others respected her, but still followed the old gods.

It was the time of winter when for twelve nights the dark powers have sway, and Oda had marked the windows and doors with salt and alder ashes, to keep the Huldrefolk out. They were the old Hidden-Folk, hungry and fierce, more like trolls than alfar. She set up all her charms, and then went to rest for the night's vigil.

While Oda's preparations could keep the Huldrefolk out, she could not keep all her own kinfolk in. At first, a young boy was sent out to get wood, and then one after another the family went into the dark, either lured by voices that sounded like their loved ones or to seek what had happened to them. By the time Oda woke up and knew what was happening, the last man, a cousin who lived with the family, was starting out the doorway.

Oda had a long gold chain, her dowry-piece, that she wore looped seven times around her neck. To this she had attached a cross. Quickly taking off the chain she was able to throw it over the cousin's body and start drawing him back in without crossing the threshold herself. The cross had broken the deluding spell he was under.

Before he was quite safe, however, the Queen of the Huldre exerted her power to recover her prey, and for a while it was a struggle between Oda and the [demon] to draw the cousin one way or the other. The huldre-Queen was as voracious and vicious as the wild winter night, but when Oda hurled a wooden cross she kept on the wall toward what she guessed was the unseen Queen's head, her power was diminished.

But her power was not broken. Whether it was because Oda's aim was off or because she was not perfectly of the faith yet, it neither killed nor drove away the Queen. More efficacious was the name of Jesus, which Oda kept calling on again and again as she pulled the chain, and the Queen grew weaker and weaker with each call. At last the night grew still, Oda pulled the cousin in, and she peered out into the darkness.

Just over the threshold was a small white creature. At first Oda thought it was a lamb, because it was covered in wool, but on closer look it was a woolly white gilt [female piglet]. Reaching over, but not crossing the threshold, she picked it up, brought it inside, and wound her chain around it, and so bound it fast.

Looking out into the night, she loudly said, "I am going to keep her until and unless my family is returned," then went back and sat in a chair facing the door. She knew that the woolly white pig was the form the Queen had taken when she was defeated. During the night, sometimes after an hour and sometimes after two, the family came back, one at a time.

The last to come back, just before dawn, was her sister's daughter. When she was safe inside, she asked Oda why she was holding the piglet. Oda got up, went to the door, and showed the creature to the unseen Huldrefolk waiting in the night. "This is why," she said, and twisted its neck broken with one snap. Then she called the cousin to bring her a hammer, and she cracked its skull to be sure. "I did not say I would let her go."

The whole family became Christians after that. The Huldrefolk grew less and less powerful, and today they seem to be gone almost altogether.

Brutal! I really like this story. P.S. As a former pig farmer, I knew what a gilt was! (Gilt is to sow as heifer is to cow.)