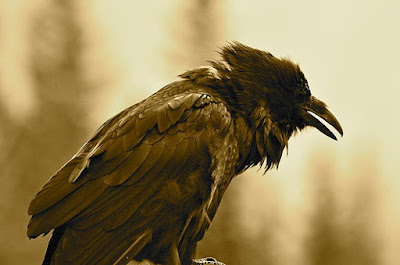 There once lived the lord of a rich land that lay on the edge of a great dark wood. He was a happy man who had been blessed with seven daughters, but in his heart he longed to have a son who would carry on his name when he was gone. Year after year passed, and though he and his lady tried, at the end of each year they still had no son.

One day in early spring the lord went hunting. The last snows lay on the ground, but the skies were bright blue. For a long while he found no game, until on the edge of the woods he started a white hare. He let fly an arrow and by good luck hit it. But by the time he rode to where it lay, a great gaunt raven had flown down and was hungrily tearing at the hare.

"You have more need of it than I," said the lord, and let the bird eat. While he was watching he fell to thinking, and heaving a sigh, said, "If I only had a son whose eyes were as blue as the spring sky and who had hair as dark as the raven's feathers! Then I might be completely happy!"

"So be it!" croaked the raven, and having had it's fill flew into the woods. The lord was astonished, but when he returned home to his castle he told no-one of what he had seen and heard.

Time passed, and nine months later around Christmas-time the lord's wife did bear a son, and even when he was first born his eyes were as blue as the spring sky and his hair as dark as raven feathers. But so difficult was the birth that his mother hardly had time to hold him in her arms and name him Little Yule before she died.

The lord was stricken with grief. He proclaimed his will, that his son should rule the land when he came of age, and he commended the care of their brother and his land to his seven daughters. Then he too died of a broken heart, just as the old year passed away.

The seven daughters were at first sad, but as they took up rule they became more and more pleased with the way things were. Instead of caring for the land and its folk they began to spend their time and gold on entertainments and luxuries for themselves. They delighted in having no person over them, and made a pact that none of them should ever marry, but hold the power amongst them for all time.

As for Little Yule, he was kept locked away alone for a while, and then put in the kitchen and given little care, in the hope that he might come to mischief and be out of their way forever. The old cook had no idea the child was the son of the old lord, but raised him as a foundling, and as he grew older Little Yule was put to work as a servant. He tended the fire in the great hall of the castle and slept by it wrapped in a ragged blanket.

Despite his lack of nurture he grew up strong and cheerful, but with no knowledge of who his parents were or that the seven grand ladies who ruled the castle were his own sisters. In time, all who had known of his birth thought him dead, or died themselves, and as little Yule came close to his coming of age he had no idea of his heritage.

One thing he did have was his father's old bow and arrows. He had found them cast away and neglected in a forgotten nook, as the seven sisters had little use for such things. Taking them for himself as things that had been abandoned, he began to care for them and practice shooting, and he grew skillful in their use.

So it was that as the time for the Christmas feast drew near he decided to go out hunting, as he knew from past times that little of the bounty that the seven ladies spread would come to him. The snow was deep and the skies were blue, and as chance would have it he came upon a hare on the edge of the great woods and shot it cleanly through the neck.

As the youth sat down to draw the arrow and clean the hare, a gaunt black raven flew down and stood in the snow near him, rattling hoarsely and casting hungry eyes on the hare. Though he had little enough cheer for himself, he took pity on the bird, and saying "There is enough for thee and me," he cut the meat into portions and shared it with the raven, which hungrily ate all that was given it. When it was finished and Little Yule was rising to go, the boy was astonished when the old bird started to speak.

"Ah, Little Yule," it said. "It's a terrible thing that you should have to hunt and share your Christmas meal with a raven, when all the good things in this land, and the land too, belong to you by right. Still, you are a kind soul, as your father was, and I shall help you."

"You knew my father?' said the youth. "Please, tell me who he was, for I have never known."

"He was the lord of this land, and father of the seven ladies who now rule. You are their brother, whom they have neglected and cheated, and by rights you should be a lord. But do not worry; go home and say nothing of what has happened, and I shall come and help you regain your inheritance before the year is out."

With that the raven spread its wings and flew into the wood. Little Yule made his way back home. Once there he could look at nothing as he had before, and his heart burned every time he passed one of his seven sisters, and they paid him no more heed than if he had been dust upon the floor. Still, he said nothing, and waited to see what the raven would do.

The time for the great feast came, and the seven sisters had better and more delicate dainties made for themselves and their friends than ever before, with no thought for their servants or the poor. As for Little Yule, he was made to serve at the table, without a bite or a sip for himself. In the middle of the revelry there was a knocking, and before any one could answer it the hall doors swung open and a strange procession entered.

It was led by a tall figure of a man, dressed in flowing black robes and wearing the gold chain of a seneschal. He carried a black staff and looked down his long pointed nose at the seven ladies and their company. Behind the seneschal were seven handsome lords with big black beards. They were dressed in rich furs, and had rings twinkling on their fingers and jeweled swords at their sides.

The tall man introduced them as the seven dukes of the great forest, and explained that they had come as neighbors to join in the celebration. At first the seven ladies were puzzled and a little afraid, as they had never heard of these neighbors, but the dukes were so handsome and acted so charmingly that soon all their fears were allayed and the festivities were resumed with even more joy than before.

Over the next few days after Christmas, the seven ladies grew enamored of the seven dukes so much that they began to consider breaking their lifelong vow. They decided to hold a secret meeting in the great hall when everyone had retired to bed to determine what they should do. The seneschal knew of their plotting and told Little Yule to place a log in his blanket and then hide somewhere safely nearby to see what happened.

Late that night when all were asleep the sisters gathered in the great hall.

"Oh, how I wish we could wed our dukes!" said the first.

"We would be even richer and more powerful!" said the second.

"But if we do that," said the third, "The church record will be opened."

"All would be reminded of our brother's birth, and we would lose what we have," said the fourth.

"If only he had died!" cried the fifth.

"There is still time for that," said the sixth. "Here he is in his blanket by the fire."

"Let us rid ourselves of him at last!" said the seventh, and all seven grabbed hold of the log in the blanket and tossed it into the fire.

The flames blazed high, and out of the fire strode the tall figure of the seneschal, and behind him were the seven dukes of the great forest. But now their swords were drawn, and their teeth and eyes gleamed in the firelight.

"You have had your chance," said the seneschal. "If you had taken these dukes to wed and restored your brother, they would have taken you each to a fair realm, and they would have become truly men. But as you have shown yourselves to be murderous and traitors, your fate shall be otherwise."

He struck his staff to the stones of the floor, and the dukes became ravening wolves, and he struck it again and the seven sisters became white hinds. He struck his staff a third time and the doors burst open, and the wolves chased the terrified hinds out of the castle hall, over the fields, and into the great woods. And whether the wolves ever caught the hinds and devoured them, or whether the hinds are running still, no-one knows.

As for Little Yule, he came out of hiding and the seneschal greeted him kindly. The next day they gathered the people and the seneschal told them of the seven ladies' treachery and fate, and showed everyone the church record where was made known the boy's birth and his father's will. Little Yule was joyously acclaimed the new lord of the land, and received his coronet on New Year's Day.

Little Yule ruled the land long and justly, and he was counseled by the wise seneschal. In time he became known as Great Yule, and he had many sons and daughters, who all had eyes as blue as spring skies and hair as black as raven feathers. When at long last he passed away, the seneschal disappeared, but a great black raven was seen flying three times around the castle. Then it flew into the woods, and was seen never again.