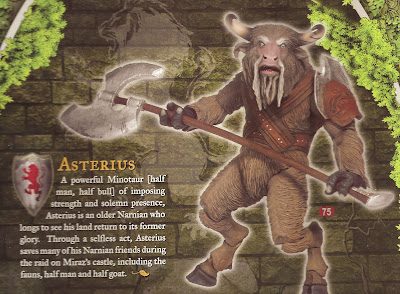 From the upcoming Prince Caspian comes Asterius, a minotaur, a member of the Old Narnians who fight against the tyranny of King Miraz. I got this at Toys'R'Us for $9.99. It has twenty points of articulation, the most unusual of them being a jointed jaw.

Asterius is part of the larger format Narnia toys; the only ones so far are Peter, Edmund, Caspian, Miraz, Asterius, and Aslan. The smaller format has far more characters and I'm afraid I may have to start buying them as well. There is a castle made for this smaller format, very nicely modelled, for $70.

I love this figure, not only because it is a mythological creature, but because Asterius, as a good character, plays against what expectations we might have had about minotaurs from the first movie, when they all seemed to be working for the witch. I'm glad that there is no racial stereotyping in Narnia.
Posted by Brer at 10:52 PM No comments:

The demise of Adventure Boy got me to thinking about an old idea of mine. The action figure world is crowded with heros and villains. In fact, in a line like Batman a run usually consists of a bunch of Batman variations and three or four villains. But heros and villains don't exist in a vacuum; there should be the ordinary people whose lives are all too often the counters in the struggle between them, whether as victims or objects of rescue and preservation. I always thought there should be a class of action figures of just ordinary people to fill this role. So I propose the creation of ExtraOrdinary Action Figures.

It should consist of six basic figures: an Old Man, an Old Woman, a Boy, a Girl, a Man, and a Woman. Their clothing should be designed to be typical, but detailed; the sculpt of their features not too bland or over-defined, but enough to show some character. They shouldn't have too many articulation points, but the joints they do have should be sturdy. They might even be manufactured in several different scales to fit your favorite formats. Because they don't belong to any particular franchise I think they could be sold two or three to a package for the price that one figure usually goes for.

If the line would prove successful, I would suggest further additions: a typical set of Medieval people to be used in historical or fantasy settings, a set of Futuristic people, and perhaps a set of WWII era people. A further line could be ExtraOrdinary Accessories, featuring common props appropriate for each set of figures.

I understand this verges dangerously on the model train or dollhouse mentality, but what of it? As a kid, some of our playings consisted of vignettes or "set-ups", as we called them, cool backgrounds or theaters of action where the adventures took place. Many action figures these days verge on the "action model", and seem never intended for play, remaining in the boxes or at most on display on top of some computer. Many collectors are interested in "army building", collecting numbers of the soldier-drone figures to make massed ranks in battle. What of civilian casualties?

I understand this line of toys might not appeal to the ordinary ten year old kid who just wants to dream about being Spiderman. But I think there is a niche that could be filled, and profitably. Heck, I'd buy them.
Posted by Brer at 7:13 AM No comments: 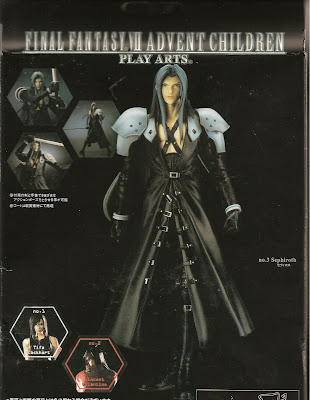 Man, I have really fallen behind. I had been hoping to post at least once a day, but one thing and another kept getting in my way, not least of all a general lassitude that made it hard for me to deal creatively with "non-essentials". Anyway, without any further ado-do, i present Sephiroth, from the Final Fantasy VII game and Kingdom Hearts. As anyone who has read this blog knows, I can resist little that has to do with Kingdom Hearts.

Sephiroth is a whopping 8 and 1/2 inches tall and his katana is 9 and 1/2 inches long. There are two pairs of spare hands in different poses and a base, which is missing the articulation frame that holds the figure up. The box, which was ordered all the way from Japan, shows signs that it might have been opened before shipped, but whether this explains the missing piece is unknown. I don't mind the boxes being open as I do it myself, but some collectors might. The figure has 15 articulation points.

Sephiroth, in the games, is the arch-nemisis of Cloud Strife, and is in some ways his evil counterpart. His name comes from a term in Cabala (I'll use the old spelling, not the trendy, thank you) for the branches on the Tree of Life describing the powers of God. He is the only character in Kingdom Hearts that I have never defeated, and is tougher than the primary antagonist, Ansem.
Posted by Brer at 10:51 PM No comments: 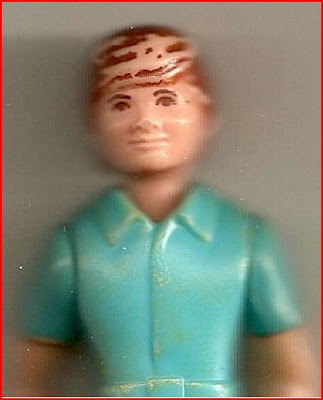 It is my sad duty to report the demise of a much-loved action figure, the Boy from the Fisher-Price Adventure People, popularly known as Will from the role he often played of Will Stanton, dressed in a cloth Jawa robe. For over twenty-five years he had the part of The Kid in any playing, especially in the early years of action figures when characters such as himself were rare. His bland, affable features were a perfect transparent palette on which to project any personality. As late as last week he had a part in a family drama, as played by my niece and her friend. He finally succumbed to hip-joint weakness as his pelvis cracked.

His funeral was attended by an honor guard of six Anakin Skywalker variants, and speakers included Will Robinson from Lost in Space and Ben Tennyson from Ben 10. As the Wild Child from Mad Max: Road Warrior stated in a telegram from the Big Black Toy Box: "He led the way for all of us in our field. We can never hope to match his endurance or his versatility." His pieces will be preserved in his own private plastic bag.
Posted by Brer at 7:50 PM 2 comments: 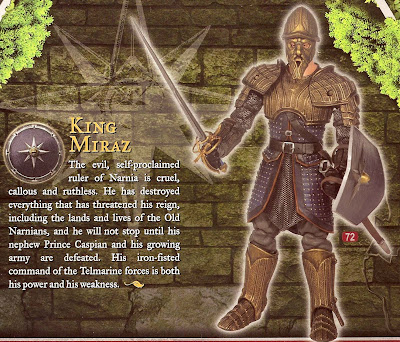 The figure came from Toys 'R' Us, and cost $9.99. It is 6" tall, has 20 points of articulation, and comes with four pieces of removable armor, a sword, shield, and helmet. As before, it comes from Playalong Toys under Jakks Pacific. 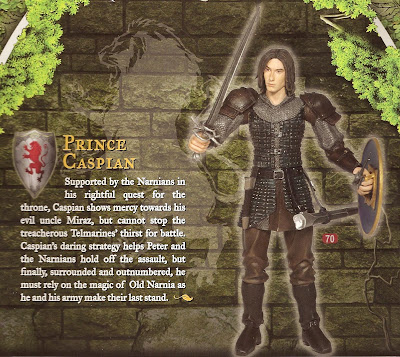 The figures from the new Chronicles of Narnia movie, Prince Caspian, are out now locally, at Toys 'R' Us. They are in two size formats, 6" and 4". I prefer the 6" format, and bought several characters; here is the first one, Prince Caspian himself, the eponymous hero of this installment.

This figure has over twenty points of articulation, sword, knife, shield, and four pieces of removable armor. It cost $9.99. The format is emminently compatible with The Lord of the Rings line. It was produced by Playalong Toys (www.playalongtoys.com) under the aegis of Jakks Pacific.

In the book Caspian is 13. "That young lad must be going on 20." One gets the feeling from the trailers that they might have done this to make rivalry between him and Peter and Edmund, and a little romantic friction between him and Susan.
Posted by Brer at 10:17 PM No comments: 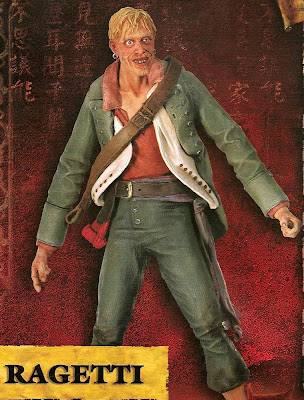 Purchased last night at Hasting's in New Braunfels for $14.99. Since I got his piratical counterpart Pintel used at Acme Comix for $5.99, I felt I had to complete the duo. Ragetti (a take on "raggedy", perhaps?) appears as he does at the beginning of Pirates of the Carribean: At World's End, and comes with cutlass. pistol, and base.

"Pintle", by the by, is a rather old-fashioned nickname for the --ahem--male generative part. 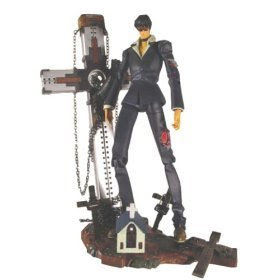 Pulled this image of Wolfwood of the web. As you can see, the figure is incredibly long and skinny. The details aren't all that clear, but it gives you some idea of what it looks like. 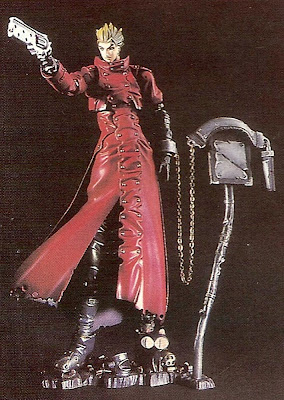 Vash the Stampede, a.k.a. The Humanoid Typhoon. From Trigun: The Planet Gunsmoke. I've been trying to an action figure of Vash for years, and always regretted not getting the McFarlane Vash in his anime line. This Vash is produced and manufactured by Kaiyodo, and distributed by Diamond Comics (www.diamondcomics.com). Comes with his various guns and the mysterious little cat that always follows him around.

In Trigun, humanity has seeded a distant, desert planet, where existence makes many choose violent means to survive. Wandering the planet is Vash the Stampede, the only person ever to be classified as a natural disaster. Wherever he goes, calamity follows, and many blame him for what happens. But as those who know him best realize, he has a deep respect for life, and it is only his actions that mitigate the disasters around him.

I got this Vash new at Acme Comix, for $19.99. I also got a used Nicholas Wolfwood from the same series for $6.99, with all his bits, including his trademark cross-shaped gun and model church for donations.

Whew. I had the hardest time composing this post because my nephew is here, watching a movie and asking a thousand questions about it all at once.
Posted by Brer at 8:05 PM 1 comment: 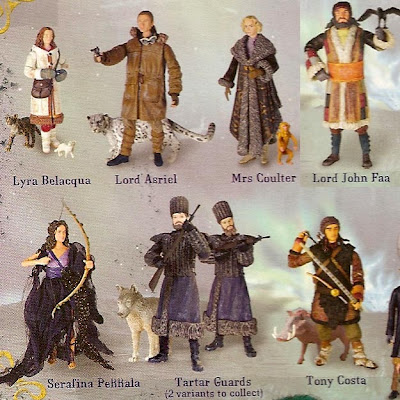 Action figures from The Golden Compass. I've never seen the movie. The one time I tried to read the book I find the prose turgid and uncompelling. Having said this, I must admit these are damn good figures, with fine modeling, nice accoutrements, and great animal side characters, whose scale fits in well with the Star Wars line. They could easily be retro-fitted into the cast of a better franchise.

Of this line, I bought three when I was in Florida at Toys'R'Us, for $2.99 apiece; they were Lord John Faa, Tony Costa (wasn't he on an '80's sitcom?), and one of the Tartar guards. They were on clearance, and these were the only three figures they had. Last Friday when I went to Hastings I found more figures there, and they were almost exclusively the other figures I didn't have; Lyra Belacqua, Lord Asriel, Mrs. Coulter, and Serafina Pekkala. These were $6.99 apiece. The strangest feature of the lot: besides having a tiny Golden Compass, Lyra came with an extra pair of hands, so she can be gloved on ungloved.

Haven't got either of the Polar Bears, or the cowboy dude, and probably won't unless I see them somewhere real cheap.

These figures were made by a company called Popco (www.popcoentertainment.com). This is the first time I've ever heard of them.
Posted by Brer at 2:28 PM 1 comment: