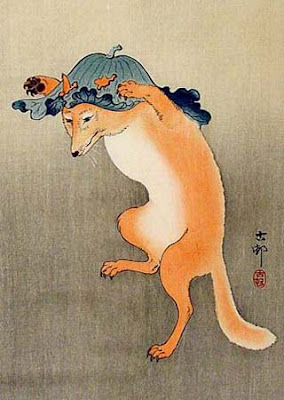 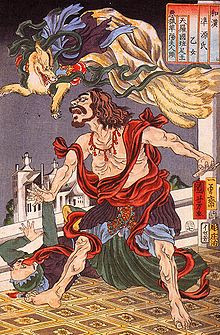 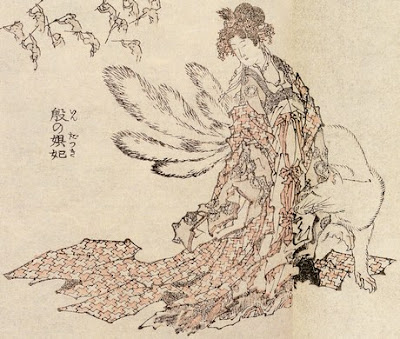 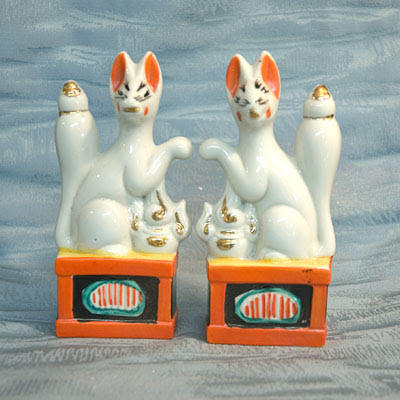 Kitsune is the Japanese word for fox, and all foxes are magical, and belong to the Yokai (supernatural) world. Their main talent is the ability to change shape; they can look like anyone, regardless of age or gender. This power (according to legend) manifests when they are one hundred years old; with every hundred years they acquire a new tail as a sign of their age and power. The wisest, strongest, most magical members of the race are the kyubi no kitsune, or nine-tailed foxes; when they reach this exalted level their fur turns white or gold. Some of these are called zenko (good foxes), and serve the Shinto kami Inari, the God of Rice. In contrast to these are the yako (field foxes), who are wild, mischievous, and occasionally malevolent.
Kitsune have many powers: They can generate fox-fire (kitsune-bi) in their tails to mislead travellers, can fly, become invisible, appear at will in dreams, create illusions, and drain the life-force from humans. But they are most famous for their ability to change into human shape, and the stories of men marrying foxes are many. There are several ways to spot a fox in human form: often a tail or paw showing will give them away; they hate and fear dogs and will flee them; they may be 'fox-faced,' with close-set eyes, high cheekbones, and thin eyebrows. They can also possess humans, usually women.
Kitsune are also accompanied by hoshi no tama, or star balls; these are pearl- or onion-shaped orbs of fire that either float around them or are carried in their tails or jaws. Much of their power depends on these items, and they are, in a sense, their removable souls. If a human captures the hoshi no tama of a kitsune, the fox has to do what the human commands.
This is just one attribute that kitsune share with the Western 'faerie' tradition. Their morality is inhuman; their physical gifts of money or wealth are often worthless items transformed by illusion; their marriages to mortals often have unhappy endings, but may produce magically precocious offspring (Abbe no Seimei in Japan is almost an exact counterpart to Merlin in Britain). The kitsuni no yemeiri (fox wedding) is said to occur during a sun shower (rain while the sun is shining--in the West this is held to be when the Devil is beating his wife), and foxes resent uninvited guests who see these affairs, as the fairies resent those who spy on their dances.
Some anime and movies in which kitsune or people with kitsune ancestry appear are Inuyasha, Naruto, YuYu Hakusho, Pom Poko, and Onmyoji.
Posted by Brer at 9:24 PM