On the Delicacy of the Dodo 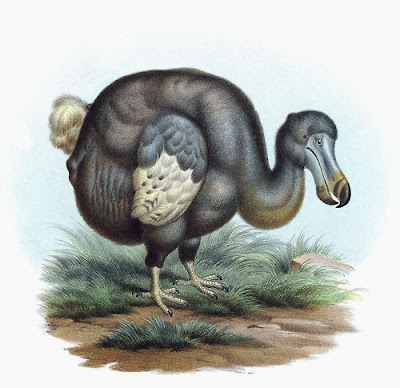 The facts about the Dodo are simple and scarce. This large flightless bird was first discovered by explorers in the late Sixteenth Century on the island of Mauritius (east of Madagascar), and in less than a hundred years it was extinct, not only eaten by hungry sailors (it was extremely easy to catch and had no fear of humans) but by the invasive species that men brought with them, including dogs, cats, rats, pigs, and even monkeys. Much about the Dodo's habits, diet, and appearance are speculation, made up from scanty accounts, rare drawings, and scattered remains. Only about a dozen dodos ever made it to Europe, and of those even fewer made it alive. For a time, many scientists even thought it was a myth, since they believed it was impossible for a species to go extinct; therefore, it must be simply sailor's tales. But its existence and extinction were eventually confirmed, and it passed into phrase and fable as an example of something gone beyond recall--"dead as a dodo."

But of all the mysteries and maybes surrounding the Dodo, there is one question that has intrigued me for years, and in the face of the tragedy of its demise it may seem callous or cruel, but--What did a Dodo taste like?

Not a too unscientific inquiry, perhaps, as human consumption played a part in the fate of the bird. One can imagine a limited stock of a delicious item being depleted to nothing by sheer human greed and carelessness. But initial investigation indicates that dodos were eaten mainly because of their ease in capture and availability, not for taste; indeed, their alternate Dutch name was "walghvogel", used in the journal of Vice Admiral Wybrand van Warwijck, who visited Mauritius during the Second Dutch Expedition to Indonesia in 1598. He explained the meaning of the name as follows: "... finding in this place great quantity of foules twice as bigge as swans, which they call Walghstocks or Wallowbirdes being very good meat. But finding an abundance of pigeons & popinnayes [parrots], they disdained any more to eat those great foules calling them Wallowbirds, that is to say lothsome or fulsome birdes."

The "loathsome"--the "disgusting," the "nauseating" bird--does not sound like "very good meat" and has led to some writers to claim that the birds were only eaten by necessity, and were just plain nasty. But van Warwijk goes on to explain the Dodo was called this "...for the reason that the longer and oftener they were cooked [i.e., "wallowed in the pot"], the less soft and more insipid eating they became. Nevertheless their belly and breast were of a pleasant flavour and easily masticated." Sir Thomas Herbert in 1634 said "It is reputed more for wonder than for food, greasie [robust] stomackes may seeke after them, but to the delicate they are offensive and of no nourishment." The one recipe I could find for cooking Dodo suggests it be done with mangoes, fruit native to Mauritius, so it would "taste like something."*

As for size and serving, the Dodo was about three feet tall and weighed between 40 and 50 pounds. How much of that would be usable meat is a matter of sheer speculation (a 20 lb. turkey yields 8 lbs. of meat, so a 40 lb. dodo might yeild 16 lbs.). Willem Van West-Zanen, in 1602, said that the crew** of his ship could barely finish two in one meal. The image of the Dodo as a clumsy dumpling of a bird might be partly attributable to mistaken reconstruction from skeletal remains. Alternately it has been suggested that the Dodo packed on pounds to survive the dry season and at other times could be a rather trim creature. As noted above, the breast and belly were the good parts; the wings were small and negligible, and the legs were undoubtedly tough and tendony like other "walking birds." It is recorded that the cooking made good stock for soup.

Which all leaves the still burning question: what did it taste like? Again, taste is relative and personal, and very hard to describe, unless you have some correlative to compare to. Despite the universality of the saying, it almost certainly did not "taste like chicken." The Dodo was a very large, flightless member of the pigeon family, Columbidae. Although I live right in the middle of dove-hunting country (and a dove is just a pigeon by another name), I regret to say I have never tasted one. I am told they are "iron-y" and "minerally," the sort of flavor one expects from wild game. As a wild bird they have little fat or grease, and most recipes suggest they be wrapped in some other meat (usually bacon) to make them savory. I imagine that in the much larger Dodo the flavor would be more diffused through the flesh. The Dodo's main diet staple is speculated to have been fruit (those mangoes, again, and palm fruit) and it has been observed that birds fed thus are quite tasty. Although Dodos were never domesticated, one can imagine, if they had been, that over 400 years of breeding would have made as much a difference in flavor as it has between wild turkey and our annual Thanksgiving fodder.

As for the eggs (a la Mr. Burns), I can find no observations on their taste. Dodos laid one egg at a time (an evolutionary response to their limited, closed environment), a contributing factor to their extinction once unnatural predators were introduced to their island. I imagine that even if they had survived a dodo egg would be a rare and occasional treat. Taste--well, for me, "eggs is eggs."

Is it possible that we will ever eat dodos again? In these days of genetic experimentation, "dead as a dodo" may not be quite as dead as it used to be. If enough Dodo DNA is recovered from cell samples, it could be infused into a living cell that has had its DNA removed (perhaps one from a Nicobar pigeon, the Dodo's nearest surviving relative). It would produce a 100 per cent Dodo. But the cloned embryo would still have to be implanted into a living creature that can carry it until the egg is laid: the size difference makes it problematic. The rarity and age of soft tissue samples of the Dodo also complicate things, as DNA degrades over time. But there is a chance, however slim, that someday dodo breast with cream gravy and mashed potatoes might be on the menu, another avian alternative.


*I wonder if the "disgusting" reputation of the Dodo had something to do with its skin-covered head, an unpleasant attribute shared with vultures and buzzards. 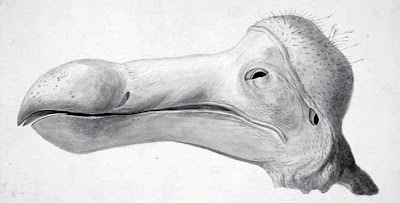 **I haven't been able to find a record of the crew complement; it could have been as few as 18 men.

Fascinating to speculate on these creatures. Seems to me that someone had a specimen mounted via taxidermy back in the day, which naturally only uses elements of the animal to reconstruct its likeness- but still they worked from an original. This is probably remembered from "The Book of Lists", a wide but shallow net of information that was a youthful addiction!

I did some quick research about what that may have eaten, and learned that many of the sailors reported seeing them eat a lot of fish, by wading into shallow water. If true, they probaby didn't taste very good, because meat-eating birds and mammals just usually don't.

Otherwise, I would expect them to taste like pigeons, which I expect taste like doves, which I have eaten. They don't taste like chicken. Unlike turkeys and chickens, doves and pigeons are all dark meat, and their meat is much "darker" than chicken or turkey dark meat, which to me looks absolutely "white" compared to dove meat. Dove meat doesn't need to be cooked with some other meat for flavor, it just needs to be cooked with something like you would cook any meat: onions, various spices, etc. A really good recipe that I have been told about but not eaten is dove meat cooked with a relatively hard-to-find spice called Beau Monde.

The warning against cooking a dodo for too long makes me think it might have something in common with much wild meat: it's tough and hard to chew, and overcooking would have made it even drier and tougher. It would have probably been improved by the use of a pressure cooker, but alas, we will never know. Unless one of those mad scientists manages to clone it.

To me, a more important question is: What would mammoth meat taste like?

And cloning a mammoth is actually a lot more viable, apparently, than cloning a dodo, because of the abundance of samples and surrogate mothers of a size.

I actually just missed an opportunity to taste dove last night when my brother-in-law brought some home from a barbecue he attended, but it was gone next afternoon.

Dodos, as much as can be figured out, were omnivorous, eating fish and shellfish, fruit, nuts, bark, seeds, grass, and later when their environment was encroached upon by man, garbage and dead pigs. How that diet (minus the garbage) would affect the taste I don't know.

I'm removing the "white meat" reference in few of your input.

"And cloning a mammoth is actually a lot more viable, apparently, than cloning a dodo, because of the abundance of samples and surrogate mothers of a size."