Robertson Davies On "The Unlived Life" "Perhaps the concept of the 'unlived life' calls for some expansion. It is not suggested that we should all obey every prompting of our desires, though it is healthy for us to give full attention to those desires which we will not fulfil, but which sometimes arise to plague us. We must be aware of the darker side of our natures. We must know what lurks in the shadows. Goethe said that he never heard of a crime which he could not imagine himself committing, under appropriate circumstances; that is the sort of self-knowledge we should seek. But the 'unlived life' is something different; it is the very often the life that has been put aside in order to serve the demands of a career, or an idea of one's place in the world, or simply--as in the case of the hero of Henry James's story--to serve one's own comfort and egotism. Very often it is love that is sacrificed in this way, but it may also be adventure, or a concern with the arts, or a friendship, or simply a greater freedom of action: these unlived elements revenge themselves , and sometimes they do it with compounded interest.

"We all know the saying that preacher's children are the worst harum-scarums, but do we ever look to see what ghosts of the parsonage they are laying by their rowdy behaviour? The banker's boy who becomes the school thief is bodying forth a repressed part of his father's concern for money. The young people who make a cult of promiscuous sex may be doing what their elders were afraid to do but longed to do. The druggies and the layabouts are living out the unlived life of too scrupulously moral and work-ridden families.

"This does not mean that these disreputable people are in the right, or that their elders are to blame for their bad behaviour. What is demonstrated is simply the principle of enantiodromia, which is the tendency of things to run into their opposites if they are exaggerated. Excessive self-love becomes no love at all; extreme prudence ends up by spoiling the ship for a ha'porth of tar; a rejection of all that is coarsely vital in life brings a shrivelling of sensibilities. As a very eminent psychiatrist once said to me: 'We attract what we fear.' What we fear is the portion of life that remains unlived. Our task, if we seek spiritual wholeness, is to be sure that what has been rejected is not, therefore, forgotten, and its possibility wiped out."

In A Magic Mirror, Darkly 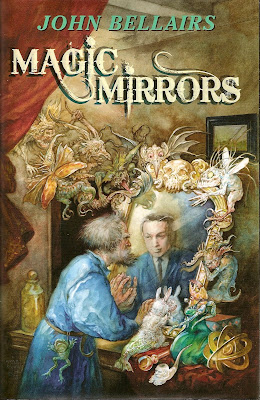 In 2009, the New England Science Fiction Association Press published Magic Mirrors: The High Fantasy and Low Parody of John Bellairs. In the Editor's Preface, Timothy Szczesuil states that there are no hard and fast criteria for NEFSA choosing an author to publish, but that it is often "that one particular NEFSA member loves a particular author enough to be willing to put together a book, and other members agree that there might be enough like-minded people 'out there' who would like to have that book."

In this case the editor's have brought together Bellairs' non-juvenile fiction into an easily available omnibus volume. These works include St. Fidgeta and Other Parodies, The Pedant and the Shuffly, The Face in the Frost, and, perhaps most significantly (certainly for many Bellairs enthusiasts), The Dolphin Cross, the previously unpublished fragment of a sequel to The Face in the Frost. While Fidgeta and Pedant have been hard to find (I was blessed to fortuitously locate both years ago), FF has enjoyed a long popularity, and its readers have had promises of further adventures of the wizard Prospero and his friend Roger Bacon dangled in their faces since at least 1973.

That was the year that Lin Carter announced in Imaginary Worlds (his book on 'epic fantasy') that FF was one of the three best fantasy books to come out since Tolkien published The Lord of the Rings. He also claimed that Bellairs had produced a short story telling how Prospero and Roger Bacon first met, for Carter's planned anthology, Magic Kingdoms. As it turns out, that volume was never made, and whether or not a copy of the story still exists in the enormous but chaotic files that Carter left when he passed away is a moot but tantalizing point. Apparently none existed in Bellairs' own archive when he passed away in 1991.

What is known is that Bellairs never quite abandoned Prospero and the South Kingdom, and according to testimony by both Carter and Bellairs' son Frank (who himself passed away in 1999) he had a file of notes, maps, and outlines for the wizard and his world. Whether this file still exists or went by way of the stove in the backyard where he apparently burned old work from time to time is anybody's guess. What is now known is that he sent a copy of the extant 130 pages of so of The Dolphin Cross to Ellen Kushner, the author responsible for getting the rights for paperback publishing of FF for Ace, and it is thanks to her efforts that we now have a last glimpse of Prospero and his world.

The Dolphin Cross begins some six months after the story of FF, and Prospero is soaking up the joys of spring in the backyard of his eccentrically anachronistic home. Soon he is having bad dreams of marching armies, however, and is caught up in the machinations of the mysterious Othamar, who is apparently trying to unite the little realms of the South Kingdom under his rule. Although it seems obvious he has magical help himself, Othamar is down on wizards and sorcerers, and most of the action of The Dolphin Cross is Prospero's imprisonment and escape, first from exile on a little island and then from an evil magician calling himself the Bishop. Along the way there is plenty of the beautifully observed nature, eccentric characters, and nightmare imagery that made FF the uniquely wonderful experience that it is. If The Dolphin Cross seems a darker work, it is perhaps because it stops in the middle of the tale, where things look bleakest in most stories.

Magic Mirrors is a must have for any Bellairs fan, and not only for The Dolphin Cross. Seeing Marilyn Fitschen's illustrations for FF in the larger, clearer hardback format is something of a revelation, and the Appendix translating Bellairs' Latin quotations (he had degrees from both Notre Dame and the University of Chicago) is very handy. But I also enjoyed the insights and reminiscences of John Bellairs' character revealed in the editor's preface, introduction, and the prefatory note to The Dolphin Cross, especially Bellairs characterization of himself as "a sporadically shy person, and a permanently eccentric one." John Bellairs claimed he gave Prospero his own "phobias and crochets"; Magic Mirrors, as even the cover art by Omar Rayyan seems to suggest,is a loving last look at a great wizard and a great author.
Posted by Brer at 12:43 PM 2 comments:

"This Agency Stands Flat-Footed Upon The Ground" 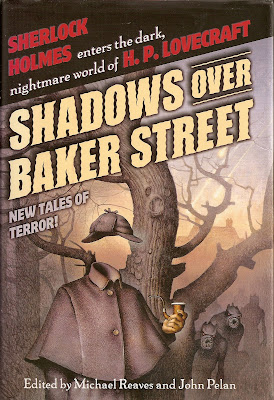 "Those Narratives With Which You Have Afflicted A Long-Suffering Public" 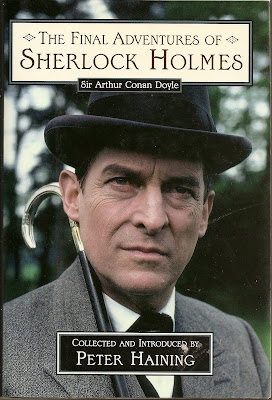 I believe it was Loren D. Estleman who said somewhere that if Dr. Watson had written all the tales that have been posthumously assigned to him he would never have had time to actually join Sherlock Holmes on his cases. Here are some volumes of such collected efforts. There is no telling how many repetitions of tales are in these collections.

The Final Adventures of Sherlock Holmes...Collected by Peter Haining*

The Further Adventures of Sherlock Holmes...Collected by Roger Lancelyn Green

The Confidential Casebook of Sherlock Holmes...Edited by Marvin Kaye

The Game Is Afoot...Edited by Marvin Kaye

My Sherlock Holmes...Edited by Michael Kurland


*Three different copies of this.
**Two copies of this; the stories are based on radio scripts by Denis Green and Anthony Boucher, featuring the talents of Basil Rathbone and Nigel Bruce.
Posted by Brer at 10:07 AM 1 comment: 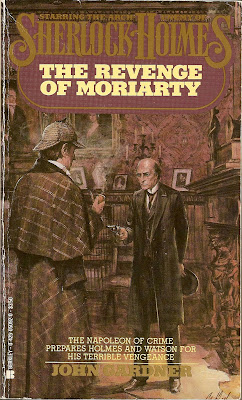 Today's list of books: novels in the Baker Street Continuum.

The Return of Moriarity, by John Gardner*

The Revenge of Moriarity, by John Gardner

The Seven-Per-Cent Solution, by Nicholas Meyer**

The Revenge of the Hound, by Michael Hardwick

Prisoner of the Devil, by Michael Hardwick

Sherlock Holmes and the Thistle of Scotland, by L. B. Greenwood

The Moor, by Laurie R. King

Sherlock Holmes and the Rune Stone Mystery, by Larry Millett

The Case of the Baker Street Irregular, by Robert Newman

The Whitechapel Horrors, by Edward B. Hanna

A Samba for Sherlock, by Jo Soares

Against the Brotherhood, by Quinn Fawcett***


*Not the Grendel John Garnder, another guy.
**Two copies of this one, different covers.
***As usual, normal type for paperbacks, italics for soft covers, and bold for hardbacks.
Posted by Brer at 9:50 PM 1 comment: