Encounter With The Brown Man 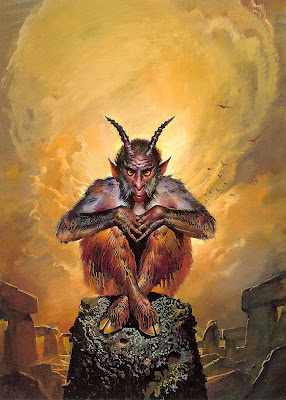 Early in the following morning Jurgen left Cameliard, traveling toward Carohaise, and went into the Druid forest there, and followed Merlin's instructions.

"Not that I for a moment believe in such nonsense," said Jurgen: "but it will be amusing to see what comes of this business, and it is unjust to deny even nonsense a fair trial."

So he presently observed a sun-browned brawny fellow, who sat upon the bank of a stream, dabbling his feet in the water, and making music with a pipe constructed of seven reeds of irregular lengths. To him Jurgen displayed, in such a manner as Merlin had prescribed, the token which Merlin had given. The man made a peculiar sign, and rose. Jurgen saw that this man's feet were unusual.

Jurgen bowed low, and he said, as Merlin had bidden: "Now praise be to thee, thou lord of the two truths! I have come to thee, O most wise, that I may learn thy secret. I would know thee, [...] I would know thee for what thou art."

The brown man answered: "I am everything that was and that is to be. Never has any mortal been able to discover what I am."

Then this brown man conducted Jurgen to an open glen, at the heart of the forest.

"Merlin dared not come himself, because," observed the brown man, "Merlin is wise. But you are a poet. So you will presently forget that which you are about to see, or at worst you will tell pleasant lies about it, particularly to yourself."

"I do not know about that," says Jurgen, "but I am willing to taste any drink once. What are you about to show me?"

The brown man answered: "All."

So it was near evening when they came out of the glen. It was dark now, for a storm had risen. The brown man was smiling, and Jurgen was in a flutter.

"It is not true," Jurgen protested. "What you have shown me is a pack of nonsense. It is the degraded lunacy of a so-called Realist. It is sorcery and pure childishness and abominable blasphemy. It is, in a word, something I do not choose to believe. You ought to be ashamed of yourself!"

"Even so, you do believe me, Jurgen."

"I believe that you are an honest man and that I am your cousin: so there are two more lies for you."

The brown man said, still smiling: "Yes, you are certainly a poet, you who have borrowed the apparel of my cousin. For you come out of my glen, and from my candor, as sane as when you entered. That is not saying much, to be sure, in praise of a poet's sanity at any time. But Merlin would have died, and Merlin would have died without regret, if Merlin had seen what you have seen, because Merlin receives facts reasonably."

"Facts! sanity! and reason!" Jurgen raged: "why, but what nonsense you are talking! Were there a bit of truth in your silly puppetry this world of time and space and consciousness would be a bubble, a bubble which contained the sun and moon and the high stars, and still was but a bubble in fermenting swill! I must go cleanse my mind of all this foulness. You would have me believe that men, that all men who have ever lived or shall ever live hereafter, that even I am of no importance! Why, there would be no justice in any such arrangement, no justice anywhere!"

"Make answer, you who chatter about justice! how if I slew you now," says the brown man,--"I being what I am?"

"Slay me, then!" says Jurgen, with shut eyes, for he did not at all like the appearance of things. "Yes, you can kill me if you choose, but it is beyond your power to make me believe that there is no justice anywhere, and that I am unimportant. For I would have you know I am a monstrous clever fellow. As for you, you are either a delusion or a god or a degraded Realist. But whatever you are, you have lied to me, and I know that you have lied, and I will not believe in the insignificance of Jurgen."

Chillingly came the whisper of the brown man: "Poor fool! O shuddering, stiff-necked fool! and have you not just seen that which you may not ever quite forget?"

"None the less, I think there is something in me which will endure. I am fettered by cowardice, I am enfeebled by disastrous memories; and I am maimed by old follies. Still, I seem to detect in myself something which is permanent and rather fine. Underneath everything, and in spite of everything, I really do seem to detect that something. What role that something is to enact after the death of my body, and upon what stage, I cannot guess. When fortune knocks I shall open the door. Meanwhile I tell you candidly, you brown man, there is something in Jurgen far too admirable for any intelligent arbiter ever to fling into the dustheap. I am, if nothing else, a monstrous clever fellow: and I think I shall endure, somehow. Yes, cap in hand goes through the land, as the saying is, and I believe I can contrive some trick to cheat oblivion when the need arises," says Jurgen, trembling, and gulping, and with his eyes shut tight, but even so, with his mind quite made up about it. "Of course you may be right; and certainly I cannot go so far as to say you are wrong: but still, at the same time--"

"Now but before a fool's opinion of himself," the brown man cried, "the Gods are powerless. Oh, yes, and envious, too!"

Jurgen went in a tremble to the Cathedral of the Sacred Thorn in Cameliard. All night Jurgen prayed there, not in repentance, but in terror. For his dead he prayed, that they should not have been blotted out in nothingness, for the dead among his kindred whom he had loved in boyhood, and for these only.

--from Jurgen, by James Branch Cabell.

"Thought All Cats Was Girls" 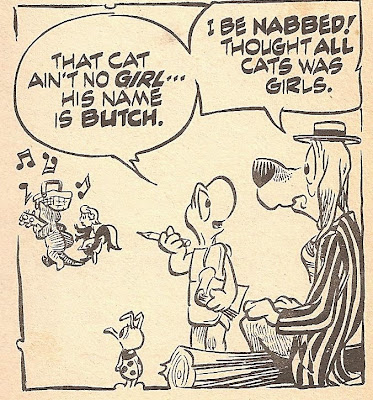 When I was a kid I usually assumed this too. 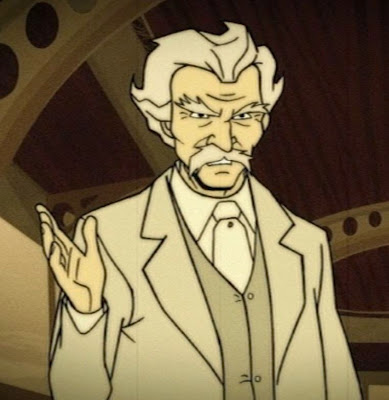 In America, we hurry--which is well; but when the day's work is done, we go on thinking of losses and gains, we plan for the morrow, we even carry our business cares to bed with us, and toss and worry over them when we ought to be restoring our racked bodies and brains with sleep. We burn up our energies with these excitements, and either die early or drop into a lean and mean old age at a time of life which they call a man's prime in Europe. When an acre of ground has produced long and well, we let it lie fallow and rest for a season; we take no man clear across the continent in the same coach he started in--the coach is stabled somewhere on the plains and its heated machinery allowed to cool for a few days; when a razor has seen long service and refuses to hold an edge, the barber lays it away for a few weeks, and the edge comes back of its own accord. We bestow thoughtful care upon inanimate objects, but none upon ourselves. What a robust people, what a nation of thinkers we might be, if we would only lay ourselves on the shelf occasionally and renew our edges!

- Mark Twain, The Innocents Abroad.
Posted by Brer at 8:39 PM No comments: 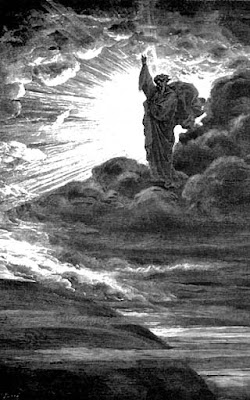 “It is one of the primeval boasts or lies of Evil that darkness came before light. But the thought of ‘darkness’ before creation is simply the image or symbol that we use to imagine nothingness, or the absence of anything, which is otherwise unpictureable. The dark is the diminution of light until it deepens to the unseeable, just as Evil is the diminution of Good until it collapses into the destruction of itself. Darkness depends upon the creation of light, as Evil depends upon Good for the possibility to exist.” --from Quoniam Sapientia Stulti.
Posted by Brer at 7:23 AM No comments: 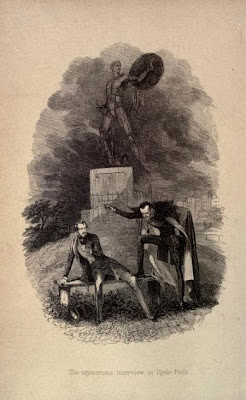 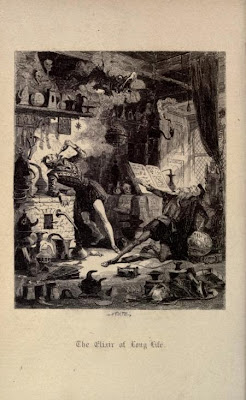 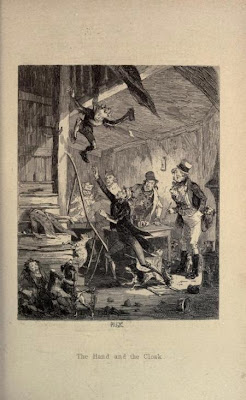 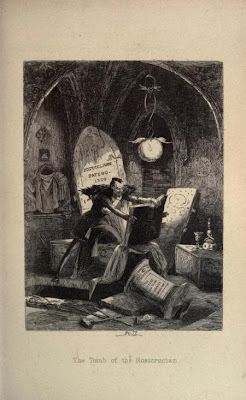 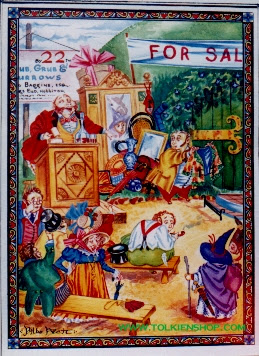 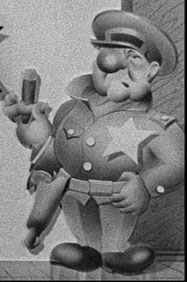 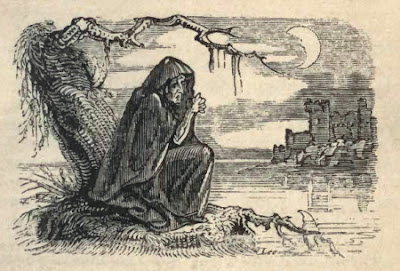 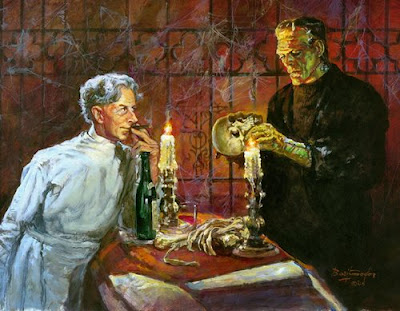 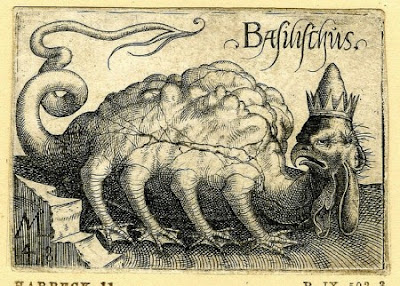 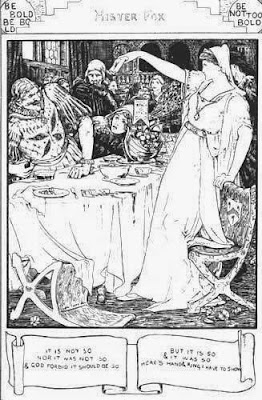 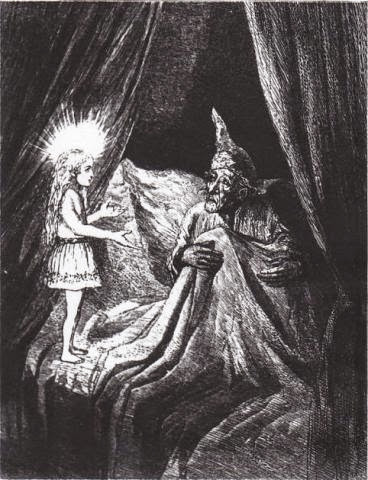 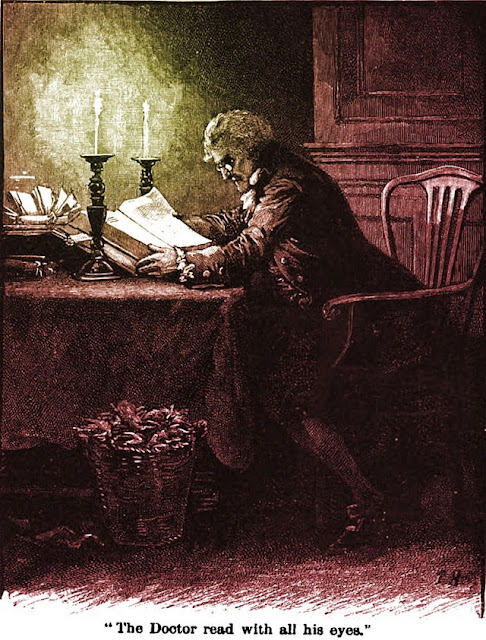 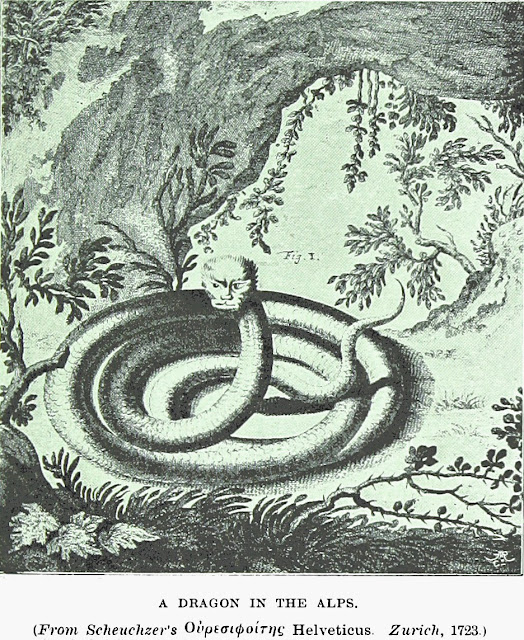 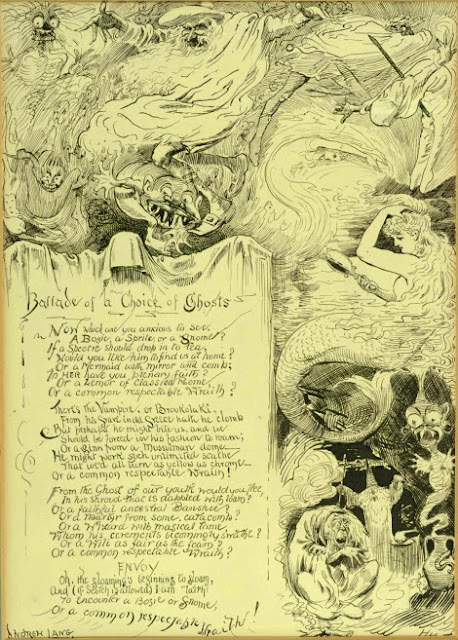 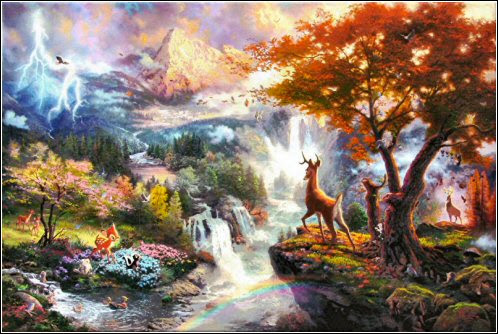