"Beowulf: A Translation and Commentary": A Review 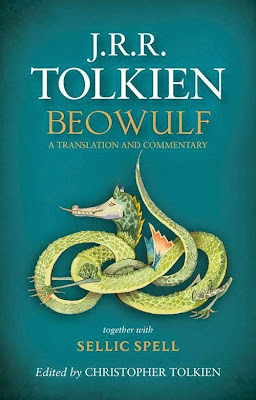 The full title of the book is Beowulf: A Translation and Commentary, together with Sellic Spell, by J. R. R. Tolkien and edited by his son Christopher Tolkien. It is the long-awaited version of the premier Anglo-Saxon epic by a great scholar of philology best known to the world as one of the greatest Fantasy authors of modern times. As such it may be asked: at whom is this edition aimed? The English scholar, or the fan of speculative fiction, or is it just the enthusiastic reader who wants to tuck into a good version of Beowulf? The answer, I think, is none of these in particular.

The person this book will appeal to most is someone with a great interest in Tolkien himself, and the history of his thought and creative processes. Christopher Tolkien, in his Preface, says as much: "The present work should best be regarded as a 'memorial volume, a 'portrait' (as it were) of the scholar in his time, in words of his own, hitherto unpublished." The book itself consists of a prose translation by Tolkien and commentary on the text extracted from a series of lectures; included is Sellic Spell, his imaginative reconstruction of the folk tale that Tolkien suspected lay behind the epic, and a couple of short(-ish) ballad re-tellings of the Beowulf story. For the Tolkien enthusiast and scholar a hearty banquet, for the casual peruser a hard garden in which to find the way.

Perhaps the most interesting (and by far the longest)section is the Commentary on elements of the poem itself. It is fascinating to watch Tolkien unpick and unpack the meanings of Anglo-Saxon words and phrases, revealing the implications and thoughts behind such terms as 'wyrd' or 'the whale-road,' of Grendel's relation to Cain and the giants of old, of the glimpses at life lived in another age revealed in simple metaphors like trouble 'denying men the ale-benches,' i.e., the simple pleasures of a stable life. Reading these notes, in the Professor's unmistakable voice, can give you the feeling of actually attending one of his lectures on one of those famous occasions when he turned the classroom into a mead hall. It would not surprise me if scholars of Beowulf would be mining this volume in years to come for insights and inspirations.

The icing on top of this rich cake and the part most immediately accessible to the casual reader is Sellic Spell ("Marvellous Tale"), the Beowulf story recast into what Tolkien imagined could be its original fairy-tale mode, followed by the two ballads. It would be easy to imagine the Spell extracted, illustrated by Pauline Baynes, and sold on its own as a children's book. Here we read Tolkien's Anglo-Saxon scholarship, love of fairy stories, and vigorous narrative skills once more combining to bring a "lost tale" to life, and the ballads Beowulf and Grendel and Beowulf and the Monsters are respectable contributions to the growing body of Tolkien's poetry (always underrated, in my opinion).

Beowulf: A Translation and Commentary is a significant addition to the corpus of Tolkien's work, and a beautiful book to boot, illustrated with three pictures from the author's own hand. As a source of insight into his creation of Middle-Earth it is at the same time peripheral and profound: the occasional reference to his own epic work is only to be found in Christopher's editing hand. But Beowulf and all the traditions behind it were a deep element in the "leaf-mould" of Tolkien's mind, and here you can sniff and handle the soil from which Arda sprang.

Chapter One: Starts and Beginnings 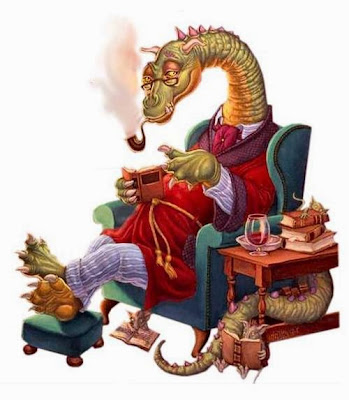 “The single biggest problem with openings is that writers have a tendency to want to begin at the beginning. They want to start where it all happens first so they don’t leave anything out. But the truth is nothing starts at the beginning, at least not since the time of Adam and Eve. Everything starts in the middle of something else, and that’s where it ends, as well. So you might as well jump in somewhere interesting as somewhere boring, and bring the pieces of the story and its characters together as you go along. Choosing the important components of your story ahead of time – and discarding the unimportant ones - will help you do that.” — Terry Brooks

“One of the easiest ways to spot an inexperienced author is what former Wizards of the Coast editor Mark Sehestedt described as “weather report, fashion report, travel report.” This is when a book begins with a lengthy description of the roiling gray clouds traced with ominous flashes of lightning then slowly but surely moves on to what the character is wearing—exactly—and how long and what color his hair is, before finally resting into several pages of the history and customs of the realm and the difference between a flugle tree and a tizzleberry bush, so that you’re most of the way through chapter one before anyone says or does anything." --Philip Athans 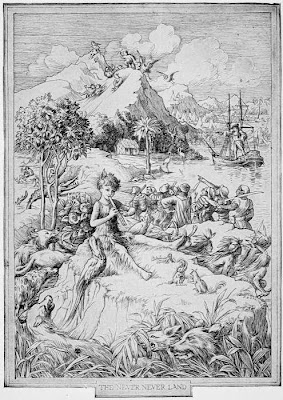 Peter Pan first appeared in a section of The Little White Bird, a 1902 novel written by J.M Barrie for adults.

The character's best-known adventure first appeared on 27 December 1904, in the form of a stage play entitled Peter Pan, or The Boy Who Wouldn't Grow Up. The play was adapted and expanded somewhat as a novel, published in 1911 as Peter and Wendy.

Following the success of the 1904 play, Barrie's publishers, Hodder and Stoughton, extracted chapters 13–18 of The Little White Bird and republished them in 1906 under the title Peter Pan in Kensington Gardens, with the addition of illustrations by Arthur Rackham.

So, section of a novel, play, novelized play, then book made from the sections of the first novel.
Posted by Brer at 8:30 PM No comments:

Come Ye Dancing In A Ring 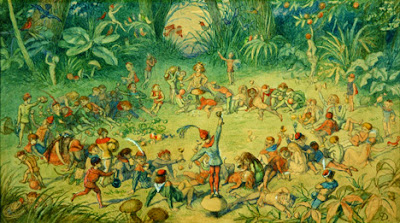 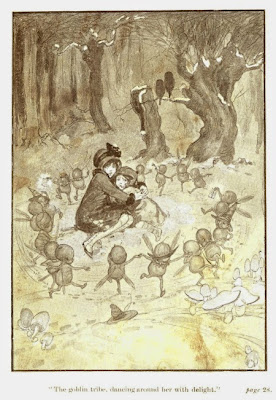 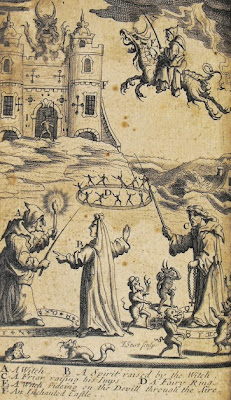 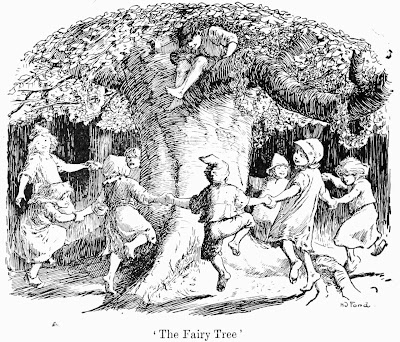 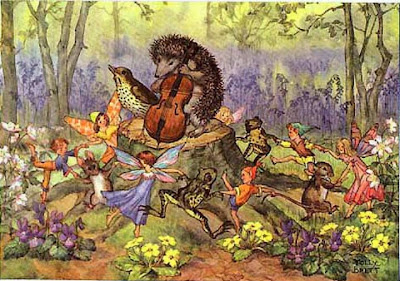 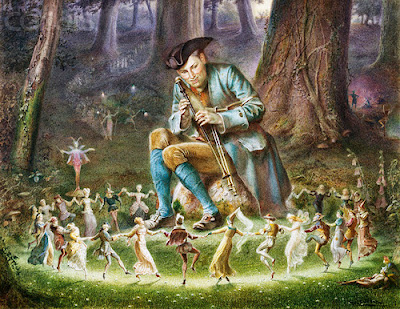 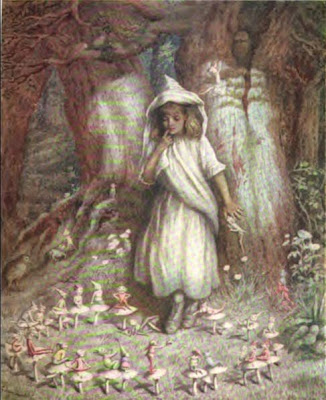 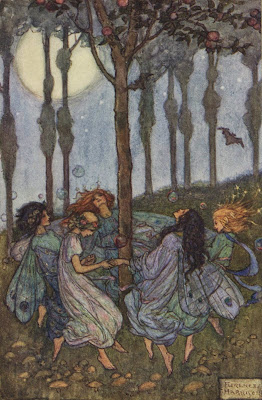 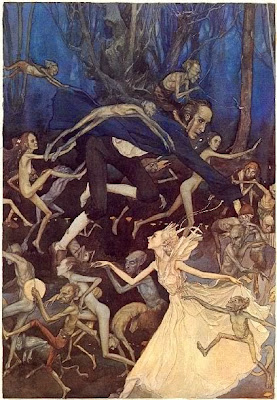 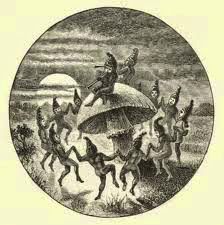 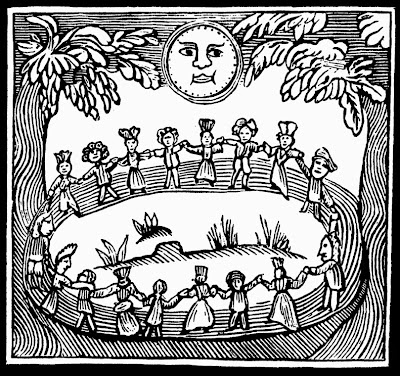 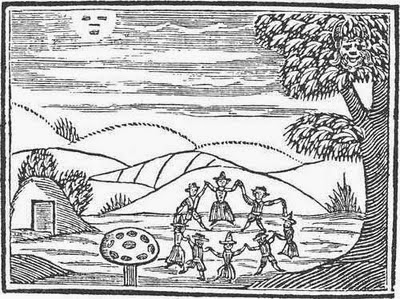 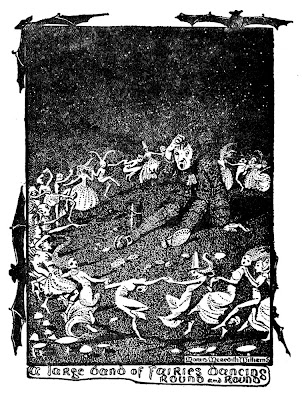 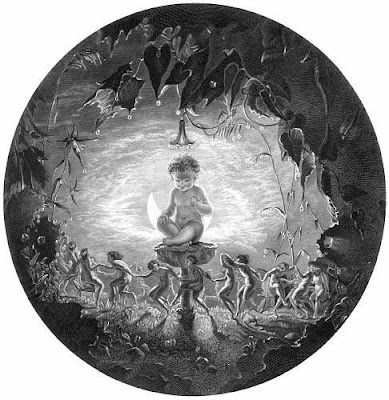 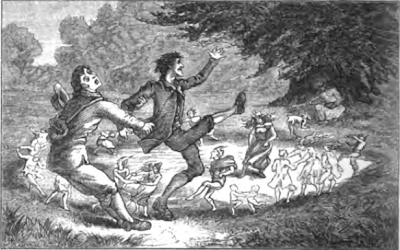 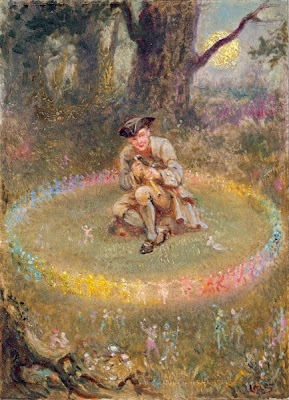 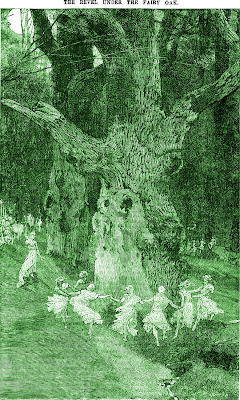 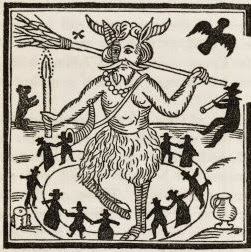 A Day in June 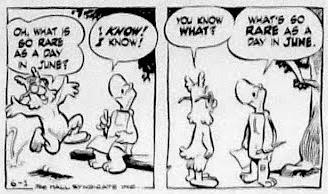 From the prelude to the first part of "The Vision of Sir Launfal," by James Russell Lowell:


"And what is so rare as a day in June?
Then, if ever, come perfect days;
Then Heaven tries the earth if it be in tune,
And over it softly her warm ear lays:
Whether we look, or whether we listen,
We hear life murmur, or see it glisten;
Every clod feels a stir of might,
An instinct within it that reaches and towers,
And, grasping blindly above it for light,
Climbs to a soul in grass and flowers;
The flush of life may well be seen
Thrilling back over hills and valleys;
The cowslip startles in meadows green,
The buttercup catches the sun in its chalice,
And there 's never a leaf or a blade too mean
To be some happy creature's palace...." 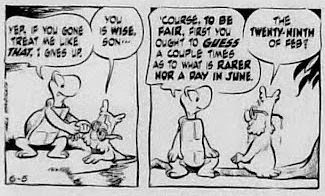