The Scariest Book In The World 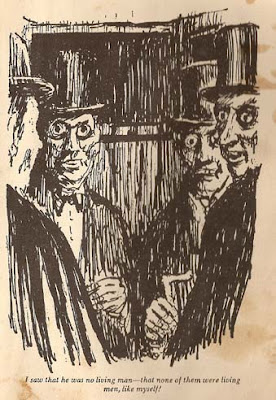 It is a shabby cloth-bound red book. Pop brought it back from the dump in the late sixties. Why had it been thrown away? I begin to wonder, now... Over the forty years it's been in the family it's been in the same shape; ragged, moldy, stained, it always seems on the verge of disintegrating but has never lost even a single page. And it is the scariest book in the whole world.

It's title: Great Ghost Stories. Edited by Herbert Van Thal, illustrated by Edward Pagram, published by Hill and Wang, Inc., of New York in 1960. Here is the list of stories, great classics of the Victorian and Edwardian eras all:

Running Wolf by Algernon Blackwood
The Haunted and the Haunters by Lord Lytton
The Spectre Bridegroom by Washington Irving
Markheim by Robert Louis Stevenson
The Squire's Story by Elizabeth Clegghorn Gaskell
The Story of Mary Ancel by William Makepeace Thackery
A Terribly Strange Bed by Wilkie Collins
An Account of Some Strange Disturbances in Aungier Street by J. Sheridan Le Fanu
The Phantom Coach by Amelia B. Edwards
The Signalman by Charles Dickens

Haunting tales, especially the Lytton and Le Fanu. But what puts the extra horror on these stories are the illustrations. I don't know who this Pagram fellow was, but he manages to fill his pictures with more scabby, nebulous horror than all the air-brushed color pictures I ever saw since. The picture reproduced above is one of the scariest of the lot, from The Phantom Coach.
Posted by Brer at 10:24 PM

Yaaarrrggghhh! That illustration scares the heck out of me! It reminds me of "London after Midnight" or "The Bodysnatchers"! Which one of these stories had the Judge who would scratch on your window, and if you peeked your head out he would slip a noose around your neck and judge you innocent or guilty. Or was that in a Ripley's? That one used to scare my pants off, too, because of the way the rose bushes outside the window would scrape on the screen.

That was the Le Fanu story.