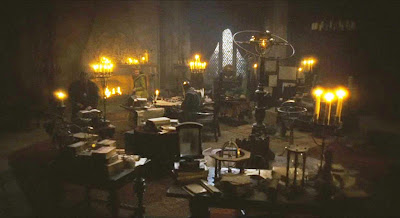 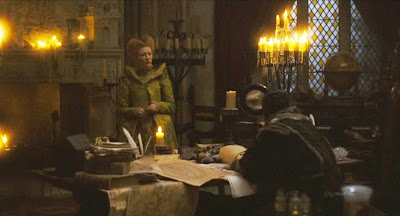 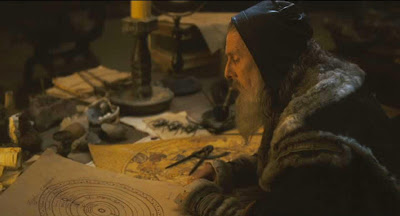 Dr. John Dee, as he appeared in Shekhar Kapur's Elizabeth: The Golden Age (2007), played by David Threlfall. Dee, an Elizabethan magus, was suspected in the times of Catholic Queen Mary and Protestant King James as a conjurer, utilized by Elizabeth as a court astrologer, despised in the Age of Reason as the superstitious dupe of Edward Kelly, idolized by occultists as a master, and finally rehabilitated as a mathematician, expert on navigation, and one of the most learned men of his time by Dame Frances Yates. His appearances abound in speculative fiction. His house at Mortlake contained one of the greatest collections of books in England, including many volumes saved from the sacking of the monasteries; sadly it was looted while he was visiting the continent.
Posted by Brer at 6:35 AM

Maybe it's already been done, but it sounds like he deserves a movie of his own! I've been reading "The Autobiography of Benjamin Franklin" lately, and it struck me how early scientists had one foot in the mystic and one foot in Reason. I think maybe they saw a bigger picture because of it, in some ways-things were wide open!

Yes! "The intuitive mind is a sacred gift and the rational mind is a faithful servant. We have created a society that honors the servant and has forgotten the gift."
Also read Karen Armstrong's A History of God - not just the chapter 'The Mystics'.