The Many Faces Of Bilbo Baggins: Part Seven 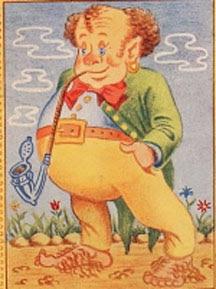 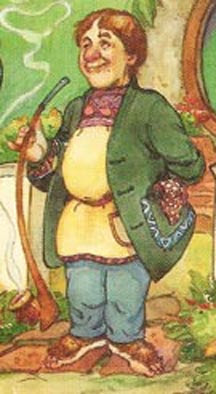 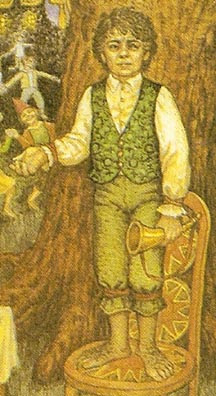 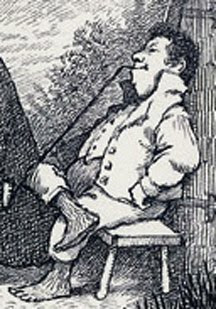 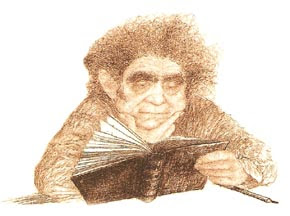 Today's first Bilbo is from a 1945 Swedish edition. He looks kind of like a genie, or a gypsy, or Jiggs from the old "Bringing Up Father" comic strip. In this edition "hobbit" was translated as "hompen." This was the sort of pointless invention that annoyed Tolkien, and led him to compose some Notes On Nomenclature for translators of The Hobbit and The Lord of the Rings.

The second Bilbo is by David Wenzel for the graphic novel adaptation.

The third Bilbo is by Inger Edelfeldt, and shows Bilbo giving his speech at his 111th Birthday Party. He seems rather dispassionate to me, not as if he's been teasing his friends and relations and preparing to pull off the biggest practical joke of his life.

The fourth Bilbo is by Maurice Sendak, from a drawing he made while considering whether or not to try to illustrate The Hobbit. What an intriguing "if only" proposition! This is by far the smuggest Bilbo I've ever seen, ripe to be taken down a notch or two by a wandering wizard.

The fifth Bilbo is by Lidia Postma, and has been re-used in many of David Day's Tolkien books. It shows Bilbo in a scholarly mood, perhaps considering a passage in his memoirs. It's hard for me to give a completely unbiased judgement on this portrayal, as it bears a very strong resemblance to my Great Aunt Ruby.

And this, I think, must be my last posting on the Many Faces of Bilbo Baggins; not because there are no more, but because there are too many. I believe I could scrounge up about forty more; there is definitely a plethora of bizarre interpretations through the decades and across the globe. But who will be the newest face of Bilbo Baggins when the movie is cast?
Posted by Brer at 6:11 PM

Good stuff man. Some, of the drawings were way too cartoonish. Bilbo became a freaking warrior man. With Sting and all.