"In A Magic Place": A Glance at "Here Comes The Grump"

Here Comes The Grump was a cartoon show that appeared in the 1969-70 NBC Saturday morning line-up; I was six years old at the time, and it really tickled my fancy. It followed the adventures of Princess Dawn, her magical pet Bip (which could flatten itself out, detach its nose and send it off to search on its own, and turn around simply by switching its head and tail straight through its body), and her friend Terry Dexter, a teen from the normal world. Here they are in a typical pose: 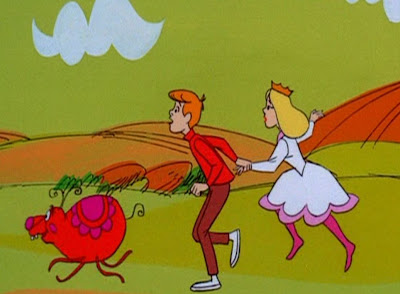 They were constantly on the run from an irascible little sorceror called the Grump (or Mr. Grump, or sometimes simply Grump) and Dingo, his jolly green dragon with a fire sneezing problem. The Grump had cast a spell of gloom over Dawn's father and his kingdom, and now only needed to capture the Princess to complete his victory. 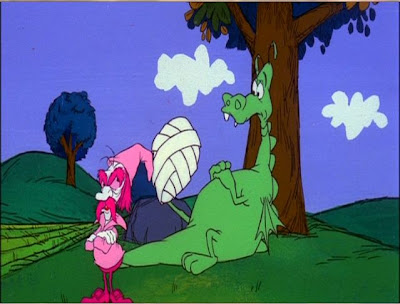 Dawn, Terry and Bip were always on the move in their magical car (which usually flew like a blimp but could also travel the roads), trying to evade the Grump and find the Cave of the Whispering Orchids, where was hidden the Crystal Key to Happiness, which would break Grump's gloom and free Dawn's home. 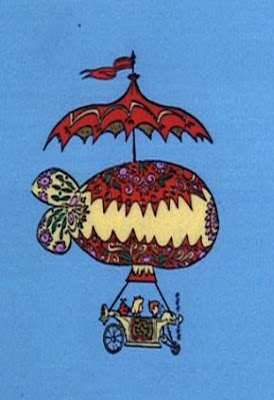 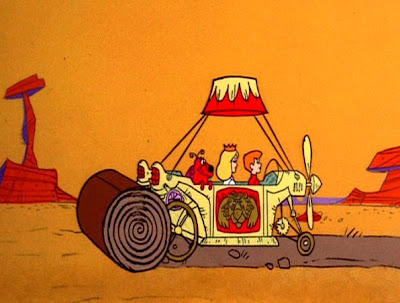 As they travelled through the Land of a Thousand Caves they visited dozens of whimsical little countries. Some were inhabited by anthropomorphic objects (living doors, shoes, houses, clocks); others by giants, witches, or wizards; some were takes on famous tales like Mother Goose or Alice in Wonderland, and some seemed based on wacky animation tropes like a living paintbrush that creates the scenery or photographs that people can jump in and out of. Some countries were themed on toys like the Bloonywoonies or the Jack-in-Box people; in others the people were defined by their proclivities for things like jokes or cleanliness or block-headed behavior. 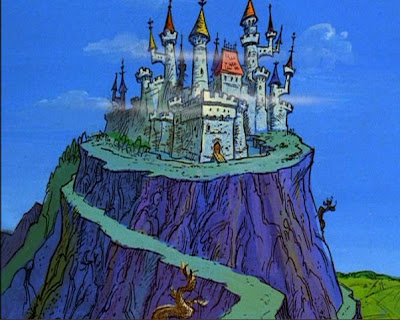 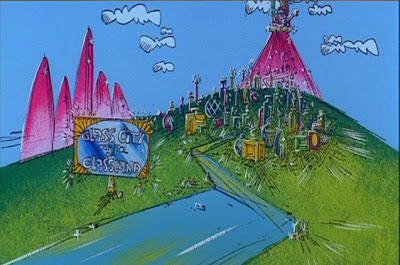 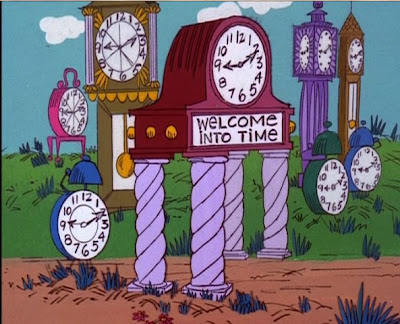 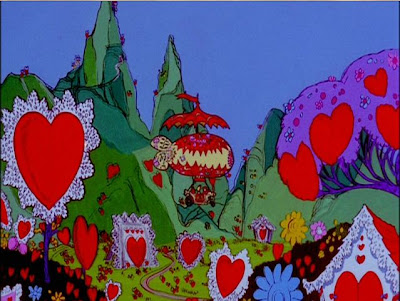 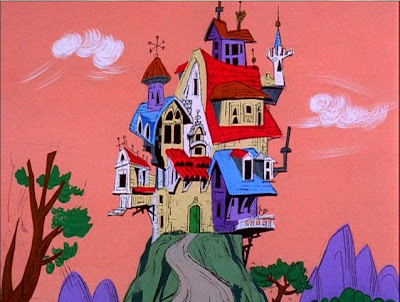 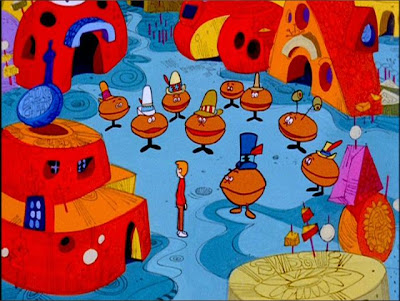 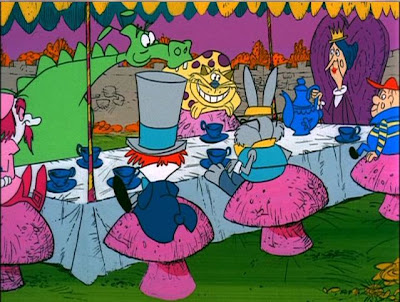 And they met fantastic characters and races, like the Toolie Birds, living tools who were great at fast building, the Shushers, who lived in fear of waking a terrible monster, and the Blabbermouth, who never stopped talking and could imitate any sound. There was a witch who turned nice when she said the word "nice," and nasty when she said "nasty." Pumpkin spectres, talking trees, living valentines, animate snowmen, ghost pirates all made appearances, and Dawn and Terry befriended them all, then hurried away as their new friends delayed the Grump and Dingo to give them a headstart. "But no matter how fast [they] go,/ Right on [their] heels and toes,/ Here comes the Grump!" 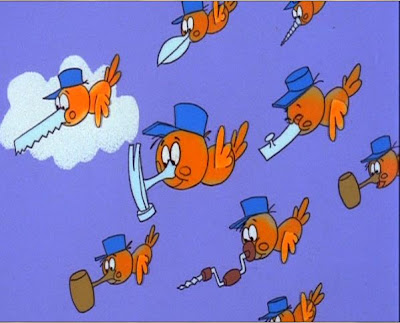 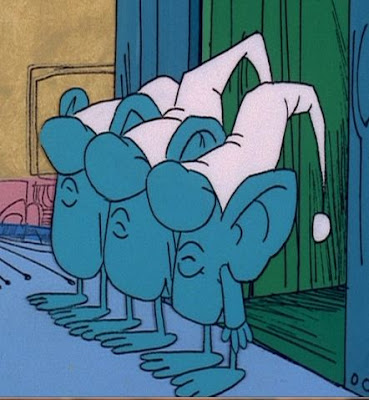 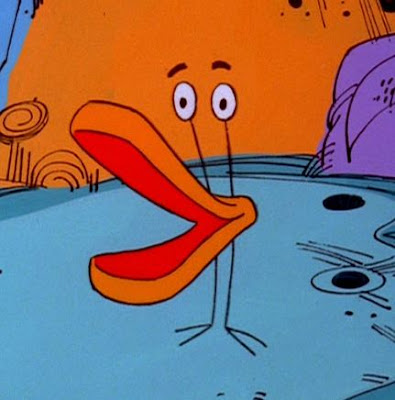 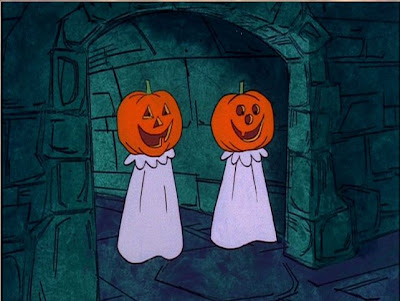 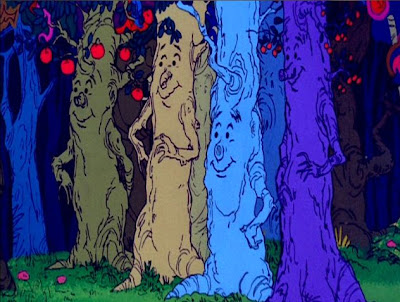 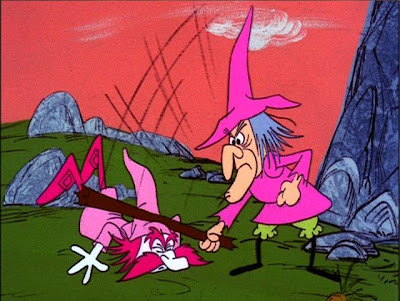 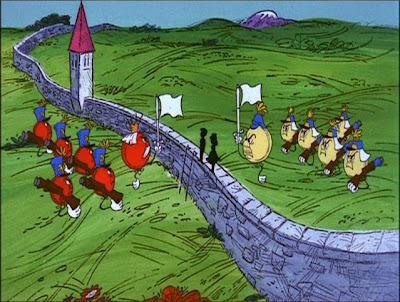 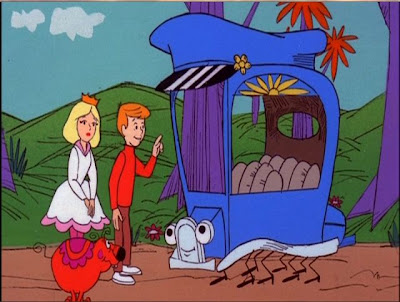 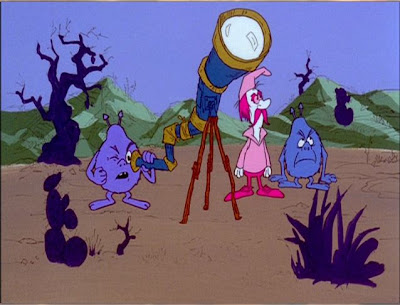 This riot of creativity was produced in one season by David Depatie, Friz Freleng, and their team, many of whom had worked in the Warner Brothers animation department. Depatie and Freleng had started their own company (the first thing they made was the Pink Panther cartoons), and with the enthusiastic consent of Larry White (vice-president of NBC children's programming, who loved the Oz-like vibe) turned from theatrical releases to TV animation. With narration by Marvin Miller (Robbie the Robot) and the voices of Rip Taylor as the Grump, Stefianna Christopherson (the original Daphne of Scooby Doo) as Princess Dawn, and Jay North (Dennis the Menace) as Terry, and with supporting voice talents of June Foray, Avery Schreiber, and Larry D. Mann, this show has the sound and echoes of my generation's childhood.

This one-season show has rerun several times in various areas and over seas (the last time apparently in the mid-90s on the Sci-Fi Channel), but never locally where I live, so finally getting the entire series on DVD has been a real blast from the Groovy Age for me. Though slightly marred by some stereotyped characterizations (mostly of native Americans), these characters are never villains, and the general message is of inclusion, kindness, and understanding. I would definitely recommend Here Comes The Grump for anyone with a taste for comedic, innocent, and whimsical fantasy.

Some of the designs are Bakshi-esque. Those were the days.

I never saw this show. Makes me wonder what it was up against on Saturday mornings, because at that age I was certainly watching something.

A quick Google shows it was against The Cattanooga Cats on ABC and The Bugs Bunny/Roadrunner Show on CBS.

In our family, after shows began to go into the second run of the season, we would often flip channels to catch fresh content.

I remember a segment of Cattanooga Cats was Around the World in 79 Days. Although I have a vague memory of enjoying it well enough, I recall precisely one line from the show: "I'll show you what a genius Bumbler is!"

I was probably watching Bugs Bunny.

I loved this cartoon as a kid. And I was also in love with Princess Dawn. In addition to "The Wizard of Oz", "Here Comes the Grump" also had some influences of the Beatles film "Yellow Submarine".

I wonder of "Adventure Time" was subconsicously influneced by "Here Comes the Grump":

I remember that the dog's nose could come off and travel around by itself.